Full Corncrake Survey of the UK in 2003 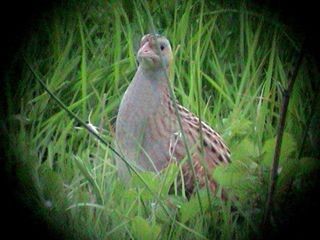 
The Corncrake is the UK's only globally threatened breeding bird. Recorded in every county in the UK in the late 19th century, its numbers fell to an all-time low of just 480 calling birds in the early 1990s – mostly on the Inner and Outer Hebrides. Full surveys of the number of Corncrakes in the UK have been carried out at five-yearly intervals since 1988. Full surveys are essential to enable us to monitor the extent to which the UK breeding range is changing. The core of the Corncrake's breeding range is in the Inner and Outer Hebrides and Orkney. This area is surveyed annually by RSPB staff, has been since 1993 and will be again this summer. In addition areas of the northwest Highlands that have had Corncrake records in at least one breeding season since 1993 will be visited and checked by RSPB fieldworkers this summer. Elsewhere in the UK we will rely on records from birdwatchers, farmers and the general public.

The last full survey, in 1998, recorded 543 Corncrakes within the core areas and an additional 46 elsewhere in the UK (including 15 birds in England and Wales). Since 1998 the number of Corncrakes in the core area has increased by over 20%. We are particularly interested in finding out if the numbers elsewhere have increased at a similar rate. If you are lucky to come across a Corncrake anywhere in the UK this summer, please contact RSPB (on 01767 680551) as soon as possible giving a detailed description (preferably with an OS grid reference) of where the bird was recorded and whether you saw or heard the bird. We would hope to follow up all potential breeding records.