The RSPB is calling on birdwatchers, wildlife photographers, walkers, anglers and watersports enthusiasts in England and Wales to minimise disturbance to groups of ducks, geese, swans and wading birds until the freezing conditions ameliorate. On lakes, rivers, wetlands and coastal areas the birds will be struggling to survive after enduring seven consecutive days of freezing temperatures in England and Wales. This guidance doesn't extend to Scotland or Northern Ireland. Martin Harper, the RSPB's conservation director, said: "During freezing conditions disturbance forces the birds to squander their precious energy reserves by taking flight when they need to spend as much time as possible feeding. We hope everyone who uses the countryside will heed our advice, allowing the millions of birds which visit our coasts and wetlands during the winter to stand a better chance of survival." 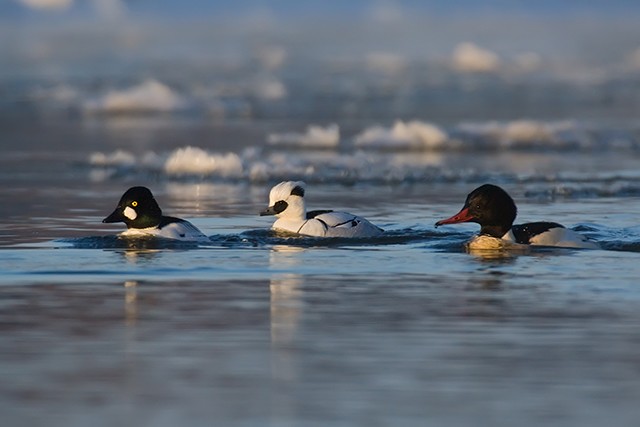 The birds affected include ducks, such as Wigeon and Pintail, and wading birds, such as godwits, Dunlin and Knot. Martin Harper added: "Even though our climate is subject to climatic change, we can still expect freezing conditions. Wildfowl and wading birds respond to these icy blasts by moving further south and west. Mild winters have allowed some of these international travellers to cut short their journeys, with more remaining within the eastern half of Britain." There is some evidence of an immigration of ducks to England from continental Europe following the freezing weather. Numbers of Smew have been recorded in eastern England, where they are infrequent visitors from northern Europe and Russia.

Martin added: "As the natural world responds to the freeze, we can expect the UK's vital coastal wetlands to play a role in helping these hardy birds survive the rest of the winter. If the freeze continues, we can expect the warmer estuaries on our west coast — such as the Severn, Dee, Mersey, Ribble, Morecambe Bay and the Solway — to be especially important as birds escape the weather. These are amongst our most important wildlife sites."