Almost a year since the lives of thousands of endangered penguins were threatened by an oil spill on Nightingale Island — part of Tristan da Cunha, a UK Overseas Territory in the South Atlantic — a survey to assess the birds' population has taken place.

When the bulk carrier MS Oliva ran aground on 16th March last year, a huge effort to rescue the penguins was launched. The ship was travelling from Brazil to Singapore with a cargo of 65,000 tonnes of soya beans and 1,500 tonnes of bunker fuel when it ran aground. As the ship broke up in the rough seas, the soya and oil were discharged into the waters around Nightingale. In the days that followed, the oil reached Inaccessible Island, a World Heritage Site, and Tristan more than 30km away. The group of islands is home to over 65% of the global population of endangered Northern Rockhopper Penguins. Residents of Tristan da Cunha, known as Tristanians, and the Tristan Conservation Department, followed by staff from the RSPB and Southern African Foundation for the Conservation of Coastal Birds (SANCCOB), came together and moved quickly to collect and clean up the oiled birds and to prevent many more from coming into contact with the oil.

Although efforts to rescue and rehabilitate the penguins were huge, we have not known until now just how much the Rockhopper population has been affected by the spill. While results from the latest counts suggest the breeding population hasn't suffered as much as anticipated, scientists are warning that the news should be met with caution. Dr Juliet Vickery, the RSPB's head of international research, said: "It's a big relief that the initial results of the counts are better than we had anticipated. We should not, however, relax our watch. There is much we don't know about this species and the extent to which breeding colony counts reveal the true picture of population trends is hard to ascertain. Though immediate impact is not as bad as we feared, there may be longer-term sub-lethal effects reducing breeding success, so it is vital that we continue to monitor the birds closely for several more years to establish the true impact of the oil spill." 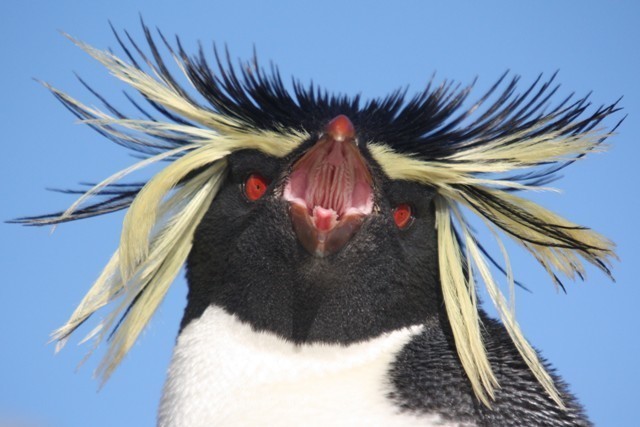 Estimates show approximately 154,000 penguins bred on the island in 2011 but estimates in the 1950s suggest there were 'millions' of birds, with two million pairs on Gough alone. The species remains globally threatened and the causes of the historic decline remain unknown. As well as the long-term effects on the penguins, the oil spill has caused concern for the important rock lobster fishery. The fishery, which is Marine Stewardship Council (MSC) certified as a sustainable and well-managed fishery, is a mainstay of the island's economy. Latest evidence shows that catches are way below normal, and rotting soya has been spotted on the traps. A dive survey showed that the wreck had broken up considerably over the winter months. On the advice of experts, the Nightingale fishery has closed and the quota for the fishery at Inaccessible Island was reduced from 92 to 53 tonnes for the 2011/12 season.

After the disaster, the RSPB launched an emergency appeal to raise funds to help with the clean-up. The appeal has raised almost £70,000 and will be used to support penguin monitoring, to strengthen the island's biosecurity, and to facilitate rodent control on Tristan to reduce the risk of rats being introduced to Nightingale. Katrine Herian, who works for the RSPB on the island, was involved in the clean-up mission last year and helped carry out the counts. She said: "Something really needs to be said about the huge Tristanian efforts in response to this disaster — without them, this could have been a very different story. While the true impact of the spill won't be known for some time yet, we can at least know that everything that could be done was done."