Family of girl bitten by Adder speaks up for snakes

The family of a nine-year-old girl who made the headlines recently after being bitten by an Adder in Hampshire has spoken up in support of snakes. Tylar Butcher, who was holidaying in the New Forest, was rushed to hospital after being bitten while walking with her family. Tylar's grandfather, Bill Flitney, an RSPB member, contacted the national wildlife charity after the story was widely reported in the press; he was concerned that the incident might spark a public reaction against Adders and wished it to be known that the family held no ill feelings towards the snakes. 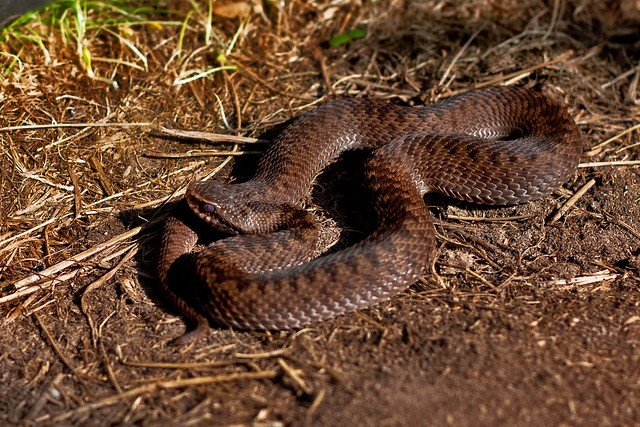 Bill says "Tylar has been very brave throughout; it was a horrible thing to happen. The first thing I knew about it was when I had a phone call from Elayne, Tylar's mum, who asked me what a Grass Snake looked like. I asked why, and she said that Tylar had just been bitten by one and what should she do. I asked what the snake looked like and she described an Adder. I told her to dial 999 and make it to a known position to meet the ambulance. And the rest has been well reported. But she's getting over it very well and is in fact now developing quite an interest in snakes! We are all very keen to say that, despite what happened, we certainly don't feel angry towards these creatures."

The RSPB's Tony Whitehead says: "Many of our nature reserves, especially in southern England, are home to snakes including Adders. Indeed Dorset and the New Forest are perhaps the richest areas in the UK not just for Adders, but for Grass Snakes and the nationally scarce Smooth Snake — the only three truly native species of snake in the country. It's only the Adder that is venomous and needs, naturally, to be treated with respect. However, although this is of little consolation to Tylar, they are normally quite timid creatures and more often than not they simply slip away unnoticed if in the vicinity of humans. They generally only bite if threatened, trodden on or cornered as they don't really want to waste their venom on things that aren't prey."

The RSPB works closely with Amphibian and Reptile Conservation (ARC) on managing its land for the benefit of reptiles, including snakes.

Nick Moulton, Conservation officer for ARC, says: "There's a lot of concern at the moment about falls in the number of Adders in our countryside. Recent surveys are suggesting a third of our known populations are declining. Reasons for this include direct loss of habitats through development, and changes to land-management practices that have resulted in the loss of "scrubby and tussocky" grass areas that Adders favour. More than ever, Adders, as with many other reptiles and amphibians, need our support."

Nick said: "In 2009 ARC carried out an investigation into people's attitudes towards snakes. The results were fascinating. Although six out of ten people interviewed had never seen a snake in the wild, half expressed either fear or unease towards snakes. We hope our campaign will better educate people both about the creatures themselves, and about the need to look after them in the wild."

Tony added: "We congratulate Tylar's family on their support for snakes, in spite of what happened. Next time they are down in the area we'd be only too glad to host them on a visit to one of our Dorset nature reserves to show them the sort of work we do to manage our land for reptiles."