Falling stars of the garden

Almost 600,000 people took part in this year's RSPB Big Garden Birdwatch, counting over nine million birds. Sadly, the counts revealed that Starling numbers are at an all-time low since the survey began more than thirty years ago. Starlings have been on a downward trend for the past 25 years and have declined by almost 80%. In the first survey in 1979, the average number of Starlings seen in UK gardens was 15. This year Starling figures were at their lowest ever with an average of three seen per garden. Though still at number two on the results board, Starlings were seen in fewer than half the UK's gardens.

RSPB experts are beginning research into the decline of this garden favourite. Possible reasons include changes in their feeding habitats and changes beneath the soil reducing their insect food. The Starling declines are mirrored across much of northern Europe too and, because of this drop in numbers, the species is red-listed as a bird of high conservation concern. RSPB scientist Mark Eaton says: "The unmistakable flash of the glossy purple-green Starling is a familiar sight for many, but sadly it seems their numbers have dropped even further in this year's survey. Despite usually being such a familiar and still widespread bird, their numbers have steadily dropped most years since 1979. We've been monitoring this decline and encouraging people to step up and help birds like Starlings, but we will also be conducting some scientific research into the exact reasons for these declines. It would be a tragedy if the numbers continue to plummet and we will do all we can to help stop this happening."

As well as being garden favourites, groups of Starlings — known as murmurations — are famous for their amazing winter displays as they gather in huge groups above roosting sites at dusk, twisting and turning as one body in the air before settling down for the night. Despite these murmurations involving hundreds of thousands of Starlings in some places, numbers in these spectacles are also dropping. 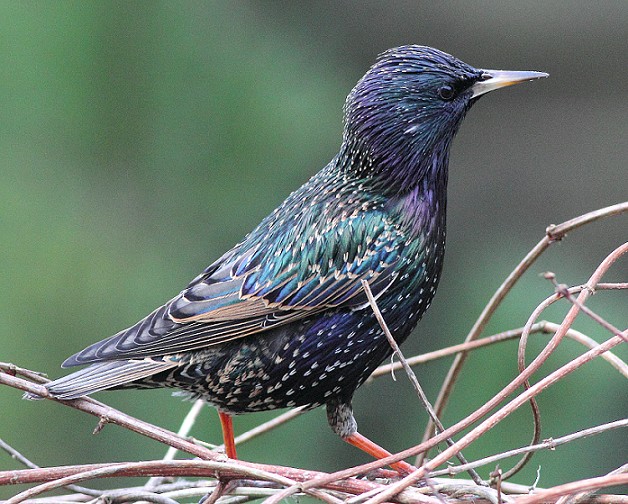 Thankfully, it wasn't all bad news in this year's Big Garden Birdwatch results. Goldfinches are up one place at number seven this year. This colourful bird has been steadily increasing in UK gardens and first reached the top ten in 2008. Blue Tits have just overtaken Blackbirds to take third place, with an overall increase of 21% since the first survey in 1979. Blackbirds and Long-tailed Tit numbers have both dropped since last year. Blackbirds were down 22% and Long-tailed Tits down 33%. This is likely due to milder weather which enabled them to find food out in the wider countryside.

592,475 people counted over nine million birds in this year's Big Garden Birdwatch. Over 70 species were recorded in 285,440 gardens across the UK over the weekend of 28 and 29 January. Without a prolonged cold snap this winter, more birds would have survived compared to the last two winters so many birds will have a better start to the breeding season. Sarah Houghton, RSPB's Big Garden Birdwatch project manager, said: "Even in mild winters people see a lot of birds in their gardens. It was nine million this year, so the survey is really helpful to get a snapshot during the winter months. It is great that so many people use Big Garden Birdwatch as an annual activity to monitor what is happening in their gardens."

People across the length and breadth of the UK stepped up for nature to take part in this year's Big Garden Birdwatch, from as far north as Shetland, as far south as The Lizard in Cornwall, as far east as Lowestoft and as far west as Enniskillen. Big Garden Birdwatch also revealed some regional differences in numbers of garden birds. Chaffinches are only sixth highest on the board in England, while in Scotland they make it to number two with an average of 4.7 birds seen per garden.

Almost 90,000 schoolchildren and teachers took part in the schools version of the survey, the Big Schools Birdwatch, this year. The UK-wide survey of wildlife in schools introduces children to the wildlife visiting their school environment. Nearly 3000 classes from more than 2,000 schools were involved.