A multi-year project to remove invasive rodents from South Georgia has completed its final baiting phase and hopes are high that the island is now totally rat free, the South Georgia Heritage Trust (SGHT) has announced.

This British Overseas Territory in the South Atlantic is an internationally important sanctuary for seabirds, as well as home to endemic species such as South Georgia Pipit. It is home to 15 per cent of the world’s Wandering Albatrosses and 46 per cent of the world breeding population of Grey-headed Albatrosses – both of which are declining and listed as Vulnerable by BirdLife International.

Project Director, Professor Tony Martin, Professor of Animal Conservation from the University of Dundee explained: “When I first began coming to this magical island 20 years ago, I only dreamed that it could one day be free of rats, and now because of our work, I can say that it is very likely that South Georgia is rat free. Already South Georgia Pipit, the world’s most southerly songbird, and South Georgia Pintail, both endemic species found only here, are returning in numbers we could never have imagined, along with other species which were the victims of rats. But it will take decades, even centuries, before the birdlife returns to the numbers which existed before man – and rodents – arrived.”

The story is far from over, however. The Habitat Restoration Project will now enter a new phase, which will include intensive monitoring to identify whether the baiting has been successful, and sharing the experience and lessons learned in order to contribute to the future success of other eradications around the world.

Planning for the ambitious Habitat Restoration Project began in 2007, and the fieldwork was undertaken in three phases in 2011, 2013 and 2015 by teams comprised of the world’s leading experts in eradication work.

The enormous scale of the project is revealed by the operational statistics:
• A total of 405 square miles successfully baited.
• 290 tonnes of rodenticide spread by three former Air Ambulance helicopters.
• 100 per cent of the island’s rat-infested areas now baited, making it eight times larger than any other rodent eradication area.
• 1,000 flying hours, equivalent to flying around the world three times.

During the third and final phase of fieldwork, 95 tonnes of bait were laid by the trust’s helicopters, using GPS tracking systems to keep an accurate record of bait coverage, as well as some hand-baiting, over an area of 140 square miles. The three-month field operation involved almost 350 flying hours, requiring 260 bait pods to be laid, and 350 drums of fuel to keep the helicopters in the skies above South Georgia.

Howard Pearce, Chairman of SGHT’s international Board of Trustees, concludes: “While a further two-year monitoring period is necessary before we can be fully confident of complete success, it is certainly possible – indeed highly probable – that South Georgia is now rodent free. There have already been significant sightings of native species in areas where they have not been seen in living memory. The trust is quietly confident that success is in sight. But there is more work to be done and funds to be raised, before we can truly claim final victory over the rodent invaders.” 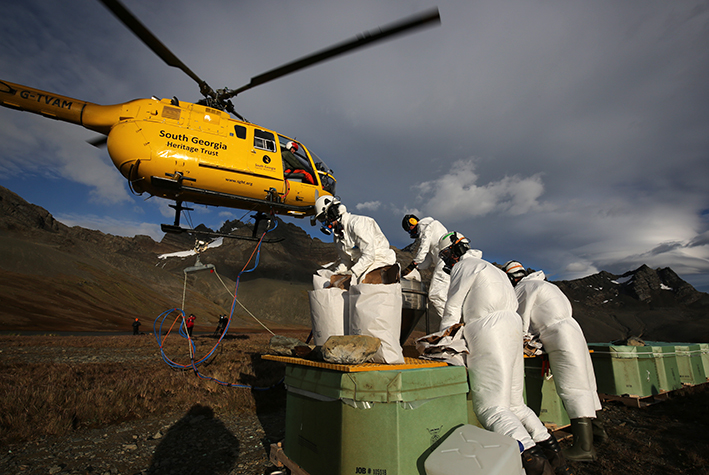