Cranes to grace our skies once again 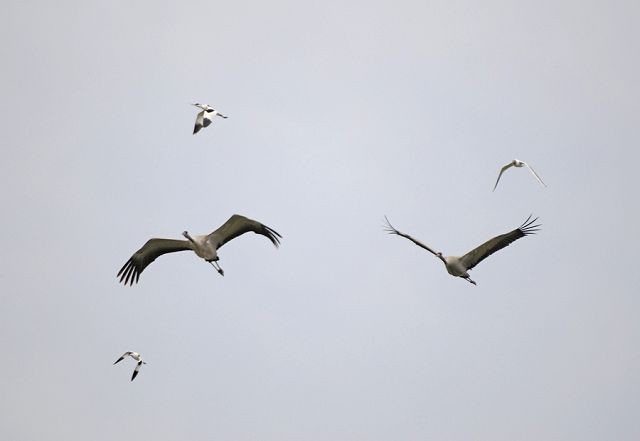 An exciting boost for the conservation of Common Cranes in Britain was announced at the 2006 British Birdwatching Fair, in the shape of The Great Crane Project.

This large, impressive bird was absent as a breeding species for nearly 400 years, before a small population recolonised the Norfolk Broads — a former breeding site — in 1979. While successful breeding has taken place, the small Norfolk population of Common Cranes remains isolated and vulnerable.

The Great Crane Project — a new partnership between Pensthorpe Conservation Trust, the RSPB and the Wildfowl and Wetlands Trust, supported by founding sponsor Jordans Cereals — aims to re-establish a breeding population of cranes at a new wetland site, securing its future as a breeding species. Common Cranes (Grus grus) were formerly widespread, but the drainage of extensive areas of wetlands and hunting caused them to disappear as a breeding bird by the start of the 17th century.

Specialists from the three organisations are planning a conservation programme to re-establish Common Cranes at a new site. A shortlist of potential release sites is being drawn up, and techniques for rearing young cranes are being investigated. The precise location will be kept confidential during the early stages of the programme, as cranes are sensitive to disturbance. Any programme would conform to agreed IUCN/Species Survival Commission guidelines for reintroduction projects.

"Pensthorpe Conservation Trust in partnership with Jordans Cereals first conceived the idea of crane re-establishment in 2005, as part of its long-term commitment to nature conservation and desire to help restore the countryside to working order. The PCT itself has worked hard over the last three years to build a centre of excellence in conservation-led captive breeding, specifically developing a unique skills base in relation to the captive rearing of European Crane.

The project attracted Jordans because conservation and wildlife-friendly food production are the key ethical values on which the company is built. It is particularly gratifying to be co-founding this unique project, which sees business and the voluntary sector collaborating for the first time to restore this iconic bird, a bellweather of the health of the countryside, to Britain," comments Bill Jordan, Chairman of Jordans Cereals and Trustee of Pensthorpe Conservation Trust.

The RSPB's conservation director, Dr Mark Avery, said: "Cranes capture the spirit of our great wetlands, and re-establishing them makes sense at a time when wetlands are being expanded and improved for the benefit of wildlife. The RSPB brings significant experience of re-introductions, and wetland habitat management, to this partnership. We can't wait to see cranes gracing the skies once again."

Dr Baz Hughes, head of species conservation for the Wildfowl and Wetlands Trust, said: "'Cranes are fantastic ambassadors for wetland conservation. They are big, charismatic, noisy birds that can inspire people to support and get involved with conservation. We will use our sixty years of expertise to hatch and rear the young cranes and develop new crane exhibits at our wetland centres in the UK."

Once the crane would have been a familiar sight across many parts of Britain. The only connection many people now have with this bird is through dozens of place names like Cranfield and Cranbrook.

A place in history

There is a long history of cranes in Britain: they feature on illuminated manuscripts, and crane appeared on the menu for Henry III's feast at York in 1251. They occur widely in Europe, where populations have suffered historically from wetland loss. Small numbers of crane visit eastern and southern England each year on migration.

The earliest release that could take place in Britain would be in 2009 and it is hoped that British-hatched cranes would nest five years after this time.