Delivered to great fanfare on 11 January 2018, Theresa May announced the government’s new 25-year environment plan at the London Wetland Centre WWT in Barnes.

In her speech, Mrs May pledged to “make ours the first generation to leave the natural environment in a better state than we found it”. She went on to talk about climate change, habitat protection and improving access to nature for children, and spoke of the scourge of plastic.

The plan’s goals are clear, she said: “Clean air, clean and plentiful water, plants and animals which are thriving, and a cleaner, greener country for us all.” She added: “And let me be very clear. Brexit will not mean a lowering of environmental standards.”

However, leading conservation charities responded with some caution, as well as positivity. The RSPB said that there were many things to applaud in the plan. Martin Harper, Director of Global Conservation, attended the speech. He commented: “I welcomed the ambition, tone and also some of the proposals,” including a commitment to create a nature recovery network delivering 500,000 hectares of new habitat and the statement of intent to sustain international leadership role to deal with global climate and biodiversity challenges.

However, he continued that there was still much to be done, including specific measures of success to judge progress and new institutional arrangements to hold government to account. He added: “The one thing that I think notable by its absence is a commitment to translate ambition into law. The only way to ensure that the ambition in the plan is met and momentum sustained is by establishing a new Environment Act essentially to do for the restoration of nature what the Climate Change Act has done for reducing greenhouse gas emissions. This applies as much to site protection as it does to preventing species such as European Turtle Dove and Willow Tit being lost from the UK in our lifetime.” 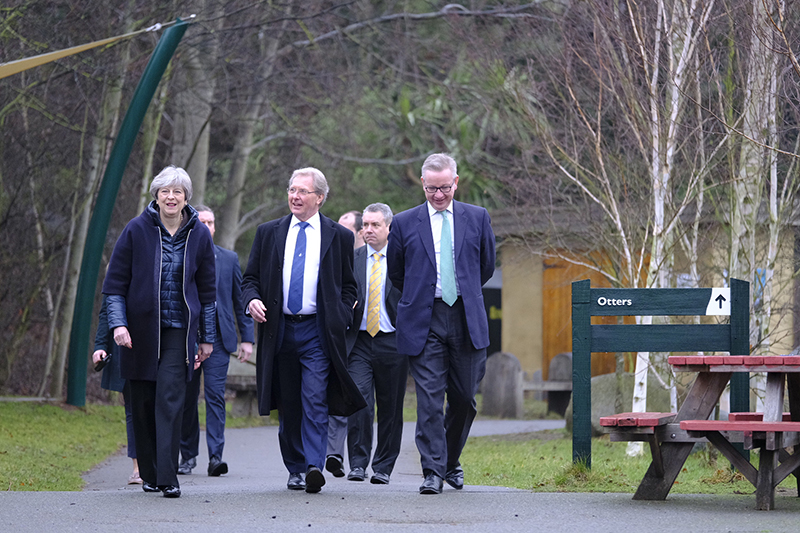 Theresa May and Environment Secretary Michael Gove are given a guided tour of the London Wetlands Centre in Barnes.

The Wildlife Trusts echoed these sentiments, describing the plan as “encouraging”. But Chief Executive Stephanie Hilborne OBE, commented: “It is clearly ridiculous to rely on political promises and the voluntary principle when it comes to securing a future for our most precious wild places. Equally, we cannot continue to bus children miles across the countryside to have an inspiring experience with nature – it needs to be part of their everyday lives no matter where they live. There must be an ambitious Environment Act in the next queen’s speech. Without real government leadership our wildlife and wild places will continue to decline and with it our mental health as even more people become isolated from the benefits of day to day contact with nature.”

The Wildfowl and Wetlands Trust (WWT) said that it welcomed the announcement as a statement of intent that sets the groundwork for a greener UK. It also urged the government to introduce a new Environment Act to give certainty to investors and environmentalists that the plan will be delivered. “It’s fantastic that the government has published its long-term plan to improve nature for the next generation,” Dr Richard Benwell, WWT Head of Government Affairs, commented. “This is a great green signpost to a UK rich in nature. Now we need a new Environment Act with cross-party support to make sure that all departments from the Treasury to Transport follow DEFRA’s lead and the government sticks to a greener path.”

The full report runs to 151 pages, but you can read a short summary.