Common Cranes have nested successfully in the East Anglian fens for the first time in four centuries, the RSPB believes. The fens, which once stretched from Cambridge to Lincoln, were the last stronghold of this charismatic, metre-high wetland bird before it became extinct as a nesting species in the UK in around 1600. 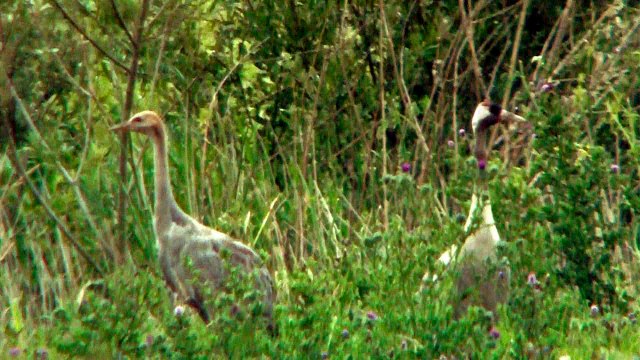 A juvenile (left) and adult Common Crane at the RSPB's Lakenheath Fen nature reserve. The juvenile is the first Crane to fledge from the East Anglian Fens in 400 years. (Grahame Madge (rspb-images.com))

In the last few days, two juvenile Cranes have been seen at the RSPB's Lakenheath Fen reserve, creating a wave of interest from reserve visitors. Although a small population of Cranes became established in the Norfolk Broads in 1981, the nesting of two pairs of Cranes at the RSPB's Lakenheath Fen reserve is believed to be the first time that more than one pair of Cranes has nested at a single site away from the Broads.

Dr Mark Avery, the RSPB's Director of Conservation, said: "It is clear that Cranes are yearning to become more widely established in the UK, and two pairs nesting at Lakenheath is clearly an important step in their UK-wide recovery. However, it isn't the only step that we need to take to consolidate the future of this British bird. The RSPB is also involved in a reintroduction programme known as the Great Crane Project, where we hope initially to re-establish this bird in the west of Britain on the Somerset Levels and Moors."

Formerly, the Crane was widely present in wetlands across Britain and Ireland. Indeed, many place names, such as Cranfield and Cranmere, are linked to the former presence of Cranes. The Great Crane Project (GCP) is a partnership between the Wildfowl & Wetlands Trust (WWT), the RSPB, Pensthorpe Conservation Trust and Viridor Credits Environmental Company. The project aims to re-establish a sustainable population of Common Cranes in Britain — within the Somerset Levels and Moors — securing its future as a breeding species. 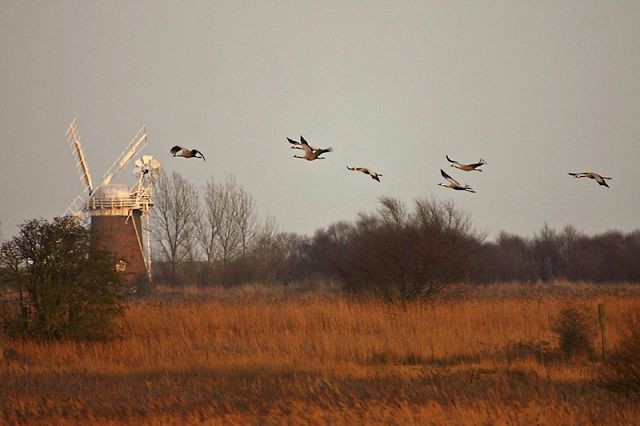 For the past 13 years, Norman Sills has been the site manager at the RSPB's Lakenheath Fen reserve, an area of fenland recreated from carrot fields in the 1990s. He said: "Seeing young Cranes flying over the reserve makes me realise that all our hard work has been worthwhile. These are fantastic birds but, when we dreamt of creating this reserve 14 years ago, Cranes were not on our list of prospects. The conservation focus for the reserve was to secure a nesting population of Bitterns, a feat we have also achieved."

The RSPB has recently launched a £1.5-million appeal to help fund Crane reintroduction in the UK. Chris Madden, the RSPB appeals organiser, said: "The carefully planned Great Crane Project starts with taking eggs from healthy populations overseas. Then incubating the eggs and nurturing the chicks the project will then release them into a protected environment."