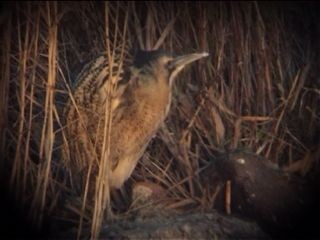 The (Great) Bittern Botaurus stellaris breeds in suitable habitat across a wide area of Europe and Asia, with an estimated 10,500 pairs in Europe (excluding Russia). In Britain the latest report on Rare Breeding Birds in the UK (1999) reported 16 booming localities, between 19 and 24 booming males, and between 21 and 25 fledged young. Thus, the Bittern is an extremely rare breeding bird in Britain and can be the highlight of a day in the field for many of us. Formerly, as across much of its range, it was much more widespread, but a combination of drainage and persecution rendered it extinct as a breeding bird here by 1900. Subsequently recolonisation took place, but a lack of suitable habitat ensured that numbers were always going to be at reduced levels and a number of environmental factors contributed to another decline from the 1950s onwards. As a breeding species it is very localised and is extremely rare away from the reedbeds of Leighton Moss in Lancashire, Norfolk and Suffolk. However, it is to be hoped that the restoration of habitat and a better understanding of management requirements will contribute to an increasing population over the coming years.

A combination of extreme rarity, inaccessible habitat and extremely secretive behaviour ensure that most encounters with this wonderful species in their breeding areas consist of one skimming across the top of a reedbed or the distant sound of a booming male. It is during the winter months that the would-be Bittern-seeker has their best opportunity to see this skulking heron. During the winter months numbers are supplemented by arrivals of continental birds. Ringing studies have shown that most of these immigrants originate from northwest Europe. During the winter birds take up residence in favoured reedbeds but are generally less choosy about where they reside and can be seen in the smallest stand of reeds or anywhere where there is food. With their cryptic plumage and ability to ‘melt’ into their habitat even wintering birds are difficult to see, and often leave observers with blurred eyesight following a day of constantly staring at a reedbed! A number of sites are well known for wintering birds, but even at these success can not be guaranteed (favoured sites across the country include: Lee Valley CP in Essex, Fleet Pond in Hampshire, Leighton Moss in Lancashire, Wintersett Reservoir in West Yorkshire, Potteric Carr in South Yorkshire, Ladywalk nature reserve in Warwickshire).

Hard weather provides the best chance of seeing birds. Freezing conditions ensure that Bitterns are forced to leave the shelter of their wintering abode and it is often possible to achieve fantastic views of birds out in the open during such times of hardship. The post-Christmas freeze produced exactly the sort of conditions necessary for obtaining good prolonged views of Bitterns and between 1st and 21st January 2002 at least 88 birds were reported, providing the most visible presence of these fantastic birds for quite a few years. This figure is likely to be an underestimate, as no doubt many more skulked undetected out of sight of prying bins and telescopes across many parts of the country. The map (below) clearly illustrates that the overwhelming majority were in the south and southeast of England, with good numbers in Cheshire and West Yorkshire. An amazing congregation of 6 birds was seen at Stodmarsh, Kent, on 2nd January, whilst at least 4 birds are present at Kenfig Pool NNR, Glamorgan. Birds are now less visible as the thaw has well and truly ended the cold snap and most have ‘melted’ back to their clandestine existence in the reedbeds. During the long freeze of 1978/1979 at least 189 birds were recorded, but many were found moribund or dead, illustrating the sensitivity of this species to sustained periods of cold weather. As always check the Bird News Extra page for the latest sightings of Bitterns in your area. Should you be lucky enough to encounter a Bittern, check it very carefully as the last American Bittern Stellarus lentiginosus to be well watched in Britain was a bird at Marton Mere, Lancashire, which was first detected during a cold snap in late January 1991!