The National Trust has identified six key species that could be seriously affected by Britain’s changing coastline due to erosion and climate change. These are: Little Tern, Puffin, Oysterplant, Grey Triggerfish, Glanville Fritillary butterfly and Cliff Tiger Beetle.

The trust published its list of ‘six canaries in the mine’ – a reference to the birds sent down mines to reveal the presence of dangerous gases – to show how “plants, animals and humans would have to live alongside an increasing rate of environmental change”.

The next century will see rising sea levels, with the 8,050 miles of UK coastline going through a process of accelerated and immense change. Extreme weather events will potentially lead to huge turmoil for wildlife dependent on this important habitat. Warming seas and the increased unpredictability of weather could also have a radical impact on coastal habitats and wildlife.

Little Terns nest in colonies on sand and shingle beaches, just above the high tide line, making them particularly vulnerable to exceptional high tides and summer storms, which are likely to become more frequent due to climate change. Winter storms and higher rates of beach erosion can also mean that nest sites from the previous year are no longer suitable.

Puffins are a good indicator of how human factors and climate change have an impact on the whole coastal ecosystem. A combination of overfishing and warming seas has led to the bony and indigestible Snake Pipefish, scarcely found in British waters 10 years ago, moving north to replace the Puffins’ main food source, Sandeel. Puffin chicks have occasionally been found dead, having choked trying to swallow pipefish.

Last summer’s wash-out saw a number of Puffins’ burrows flooded, while an exceptionally harsh winter and spring storms this year led to the worst bird wreck in 50 years, with hundreds of Puffins, Common Guillemots, and Razorbills washed up dead along the north-east coast, presumed to have starved in the difficult conditions.

David Bullock, the National Trust’s head of nature conservation, says: “The coast is at the forefront of how a changing climate will affect wildlife in the UK and is very vulnerable to the forces of change.

“Over the past decade we’ve been developing a better understanding of the coastline that we care for and in particular the 50 per cent that will be affected by increased coastal erosion or flooding in the future.”

Matthew Oates, national specialist on nature and wildlife for the National Trust, added: “Climate change could change the face of our coastal flora and fauna. With rising sea levels, our rich mudflats could simply disappear.

“Wildlife that relies on the gradual erosion of soft rock cliffs or lives on loose sand and shingle habitats could be caught out by an increasingly mobile landscape as a result of extremes in weather.

“We’re seeing more and more superlatives – the hottest, coldest, wettest or driest months on record. Even on hard rock cliffs less affected by increased erosion, we are likely to see the boom and bust of more specialist plants and animals, as they suffer from increased flooding, salt deposition or drought stress. Unfortunately there may be more bust than boom.” 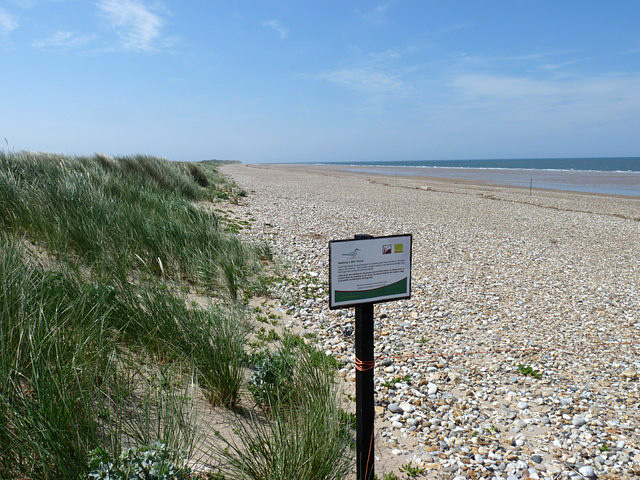 Little Terns nest on shingle beaches like this one on Scolt Head Island, Norfolk, which
are at risk from rising sea levels and increasing coastal erosion.
Photo by Zorba the Geek (commons.wikipedia.org).
Content continues after advertisements
Written by: Birdwatch news team
Login to leave a comment
Return to List