Cheeky neighbours on the decline

With its cheeky nature and its chirpy, chattering song, the Starling is one of our most recognisable birds, but figures show that 40 million Starlings have disappeared from the European Union, including the UK, since 1980. This crash is triggering concern about the bird's future status as a widespread and familiar bird. In the UK, the RSPB has launched a research project to see why this bird's population is in freefall here too. In 2002 the Starling was added to the UK 'red list' of the Birds of Conservation Concern, because its population had halved during the previous three decades.

Each winter, the UK's Starling numbers are boosted by birds arriving from continental Europe. There is evidence of a decline in the number of Starlings visiting Britain in winter, and this could be linked to the decline elsewhere in Europe. The RSPB's Dr Richard Gregory heads up the Society's bird monitoring section. Commenting on the Starling's decline, he said: "The Starling is still a plentiful bird, but its numbers are falling alarmingly." For example, the numbers recorded in winter by the RSPB's annual Big Garden Birdwatch have fallen by 80% since 1979, and by nearly a third in just ten years. Dr Gregory added: "Our records show that we have lost more Starlings across Europe than any other farmland bird. Forty million Starlings lost represents over 150 for every hour since the 1980s. This loss should be a wake-up call, because we ignore the decline of nature at our own peril." 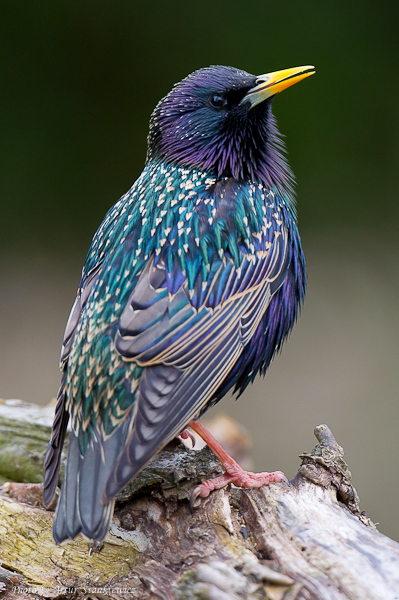 Dr Will Peach, who is leading the research into the Starling decline in the UK, said: "It is figures like these which have convinced us of the need for action, which is why we are launching a research programme to unravel the mystery of this bird's disappearance." There have been several theories put forward to explain the Starling's decline. In parts of Europe, suggestions include the loss of grassland through conversion to forestry land and the growing of crops. But these changes haven't affected the UK in the same way, so the reasons for the rapid contraction in the UK are not understood. Working in Somerset and Gloucestershire, RSPB researchers will be working with farmers to examine whether there are sufficient food and nesting sites for Starlings in livestock areas. Starlings feed by probing lawns and pastures with their longish bills, looking for soil invertebrates, including leatherjackets. These leatherjackets — cranefly larvae — are widely regarded as pests, so Starlings provide a good service for farmers and gardeners. Part of the study will examine the food supply of these pastures to assess whether Starlings can find sufficient food.

Martin Harper is the RSPB's Conservation Director. He added: "We don't know the reasons for the Starling's decline, but we hope that our research will yield the answers to ensure this bird has a secure future. Understanding exactly what is causing these declines will allow us to develop practical and cost-effective solutions for land managers and farmers. These could then be delivered through wildlife-friendly farming schemes and other policy interventions. But only if Europe and our Government grow this vital source of funding as they reform the CAP and agree the European budget over the next few months."