Champions of the Flyway: 2015 results

After a week of intense preparation and reconnaissance work from all the participating teams, the second Champions of the Flyway bird race took place in southern Israel on Wednesday 25 March. Some 135 birders were involved, with 31 teams — both Israeli and international — competing.

The day proved exhausting, exhilarating and competitive yet, as project co-ordinator Jonathan Meyrav pointed out, extraordinarily neighbourly. Bird races traditionally have a reputation for their suppressive nature, with teams routinely keeping the whereabouts of good birds quiet. Not so at the Champions of the Flyway — a busy WhatsApp messaging group constantly rang out with news of quality sightings and their locations throughout the day, enabling many teams to see species that they might not have otherwise done. Such co-operation and positivity is unique among bird races and really helps to set this event apart from the rest.

The results were revealed the following day at the event's closing ceremony: the Cape May Bird Observatory American Dippers were crowned 'Champions of the Flyway' after recording a mightily impressive 168 species during the 24-hour race. Their prize, three pairs of Swarovski Optik binoculars, were nobly donated to BirdLife Cyprus. The Birdwatch–BirdGuides Roadrunners weighed in with a creditable 154 species — an improvement on last year's score following a change in race-day strategy and the second-highest total for a British team following a great performance from the Next Generation Birders, who tallied 157 species.

Also on the Thursday, Jim Lawrence of BirdLife International announced that the combined fundraising total had reached the $50,000 mark, with all proceedings going to BirdLife Cyprus to help the charity combat the perilous levels of illegal bird trapping witnessed on the island each spring and autumn. It's with great pleasure that we can reveal that the Birdwatch–BirdGuides Roadrunners won the 'Guardians of the Flyway' award for raising the most funds of all the teams by race day — just shy of £4,700 ($7,000), fighting off stiff competition from both the Dutch Knights and Birding Ecotours teams, who both also raised well over £4,000. This simply wouldn't have been possible without the remarkable generosity of the Birdwatch/BirdGuides readership, and team members Josh, Alan and Mike, and indeed everyone at Birdwatch and BirdGuides, would like to extend their sincere thanks to all who have made donations over the past three months. 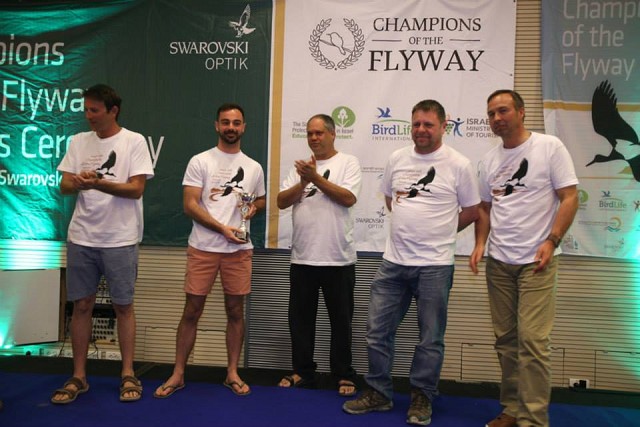 The Roadrunners collect the 'Guardians of the Flyway' award in recognition of raising $7,000 for BirdLife Cyprus.

The Next Generation Birders team won the 'Knights of the Flyway' award — a recognition of the valuable sightings information that they shared throughout the day, not least the discovery of a Black Bush Robin that at least one other team consequently added to their day list before dark. The Israeli section of the race, with some of Israel's finest birders racing alongside 8-year-old children, was won by the Jerusalem Bird Observatory Orioles, who recorded a sensational 179 species — by far and away the highest race-day total recorded so far. The team received 5000 Shekels to put towards a conservation project of their choice.

The event concluded with the BirdLife Cyprus team walking off with an initial cheque of $35,000 to put towards their efforts on the island. In the meantime fundraising continues until the beginning of May, when another lump sum will be winging its way to Cyprus. You can still donate to this worthy cause at our Just Giving page: www.justgiving.com/COTF2015BBR.