A camera has captured the moment a thief tried to make off with the eggs of a rare bird. The snaps of a hand taking a Stone Curlew egg were discovered when shocked workers from the RSPB viewed the images from a camera set to monitor a nest on Salisbury Plain in Wiltshire. A £1,000 reward has been offered for information leading to the conviction of those involved. 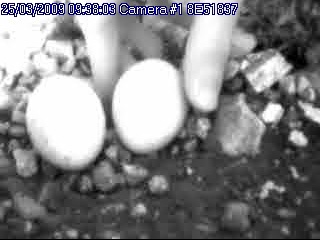 The picture was taken sometime in the middle of July. The same hand was then snapped moments later replacing the egg, presumably because the thief realized he had been photographed. Someone appears to have returned to the site about 12 hours later and intentionally moved the camera so it pointed away from the nest. It was then turned off altogether some four days after that. The tampering was only discovered when fieldworkers returned to retrieve the camera.

Andrew Taylor, one of the RSPB's fieldworkers, said: "We went to retrieve the camera and images once we thought the two young birds had hatched and left the nest. But when we loaded them on to our computers we could not believe what we were seeing — a human hand lifting the eggs. Fearing the worst, we went back to the site to investigate further. The nest, just a shallow depression in the ground, had no sign of any eggshell remnants, a sad indication that the eggs might have been taken rather than hatched. Also, while viewing one of the adults later, we saw the bird scraping the ground to create another nest: again, a reliable indication of nest failure. Although we cannot be absolutely sure, this all points almost undoubtedly towards the eggs being stolen." 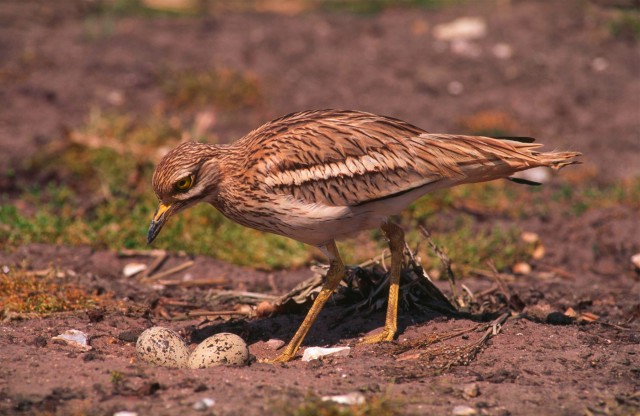 Stone Curlew are a nationally rare species and the RSPB with support from Natural England has spent more than 20 years working with farmers and landowners, including the Ministry of Defence, to reverse the historical decline of this unique and evocative bird of the Wessex chalk downland.

Ian West, Head of Investigations for RSPB, said: "Egg collectors still pose a threat to our scarcest species. In this case, all the evidence points towards the eggs being taken, which if so is a tragedy for the birds and for this wonderful species. It continues to sadden me that, despite egg collecting being a crime, and despite increased fines and the threat of custodial sentences, there is still a sad minority of individuals out there intent on pursuing this cruel obsession with the eggs of our wild birds."

Anyone with information about the theft can call the RSPB's investigations team in confidence on 01767 680551.