Capercaillie death could have been avoided

A Capercaillie that became an unwitting star due to its unusual behaviour has been found dead on a popular Highland estate. The lone male within the Rothiemurchus estate was less shy than other Capercaillie and defended its territory instead of hiding or running away when people and/or dogs approached. Within the past few days it has been killed by a dog. The incident highlights the importance of responsible access within sensitive areas in the Cairngorms National Park.

Capercaillie is on the Red List of Birds of Conservation Concern due to the long-term decline in its UK breeding range and is a priority species in the UK Biodiversity Action Plan. Keith Duncan, Aviemore-based operations officer with SNH, stressed: "This incident is regrettable and we believe was avoidable. This bird displayed atypical behaviour by approaching people instead of running or hiding as Capercaillie normally do, and in this case was killed by a dog. We asked last year that visitors keep to the paths and heed local signs and guidance, and this incident makes this advice all the more important this year. This time of year is especially sensitive for Capercaillie as the males are preparing to attract a female on their leks, so we would ask that people who want to see a Capercaillie go to the nearby Osprey Centre at Loch Garten to witness typical behaviour." 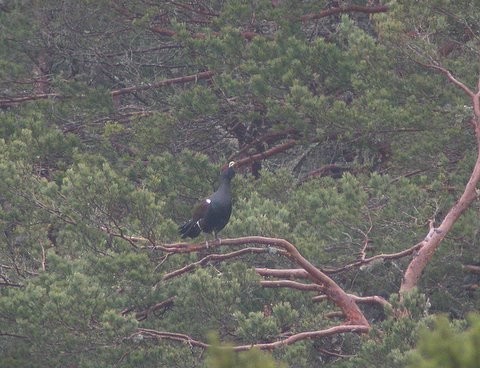 Johnnie Grant of Rothiemurchus said: "This is a great shame and it highlights the importance of visitors enjoying and using recreational facilities responsibly. This irresponsible behaviour does not just affect Capercaillie; every year Roe Deer calves and other wildlife are disturbed or injured by dogs. This year the behaviour of this lone male was much more aggressive and he was seen chasing and attacking people and bikes, etc. So Rothiemurchus designed new signs, making it clear to owners to keep their dogs on a short lead in sensitive areas to enable wildlife to breed in peace. While we do not want to litter Rothiemurchus with signage, the information is prominent for all visitors to see. We also have dog exercise areas next to car parks, which allow them to run freely and get some off-lead exercise. There is evidence our policies work — with increasing numbers of visitors to Rothiemurchus we continue to have some of the best outcomes for priority species but this is dependent on visitors taking responsibility for caring for these sensitive habitats."

Will Boyd Wallis, the Cairngorms National Park Authority's senior land management officer, said the Park is the last stronghold for Capercaillie in Scotland with around 80% of the national population. "We support all the positive measures that are currently in place to help conserve this important bird," he said. "This has been an unfortunate and avoidable incident. Ongoing work tackling responsible outdoor access — such as 'Tread Lightly', which includes a focus on responsible dog ownership — together with a dedicated Ranger service can help ensure these incidents remain a rarity."