Can the European Commission save Ortolan Bunting?

France is still trapping and killing thousands of Ortolan Buntings despite protection, but the country's conservationists are building up the pressure for change.

The French population of Ortolan Bunting has declined by 50-75 per cent in the last 30 years despite hunting of the species being forbidden by law since 1979. It was even made a protected species in 1999, but each year about 30,000 are illegally trapped and killed during early autumn migration in the south-west of France.

The Les Landes département is particularly dangerous for the species, which not only breeds regularly in France and also migrates through from Scandinavia, Poland and the Baltic. Here, traditional hunting methods such as cage traps are used to illegally ensnare the birds, which are considered a gastronomic delicacy ion some quarters (a number of well-known politicians have admitted to eating them, including former President Francois Mitterand).

Despite it being illegal, these birds can be sold to restaurants for up to €150 per bird. Its preparation and consumption is a veritable ritual; force-feeding the bunting to increase its fat reserves and then drowning it in Armagnac.

Because people consider it a cultural and culinary tradition, public authorities turn a blind eye to the practice. To make matters worse, in 2014 several French Michelin-starred chefs came out publicly on national TV to support the tradition of trapping Ortolan Buntings, pleading for at least one weekend when the trapping could be legalised. 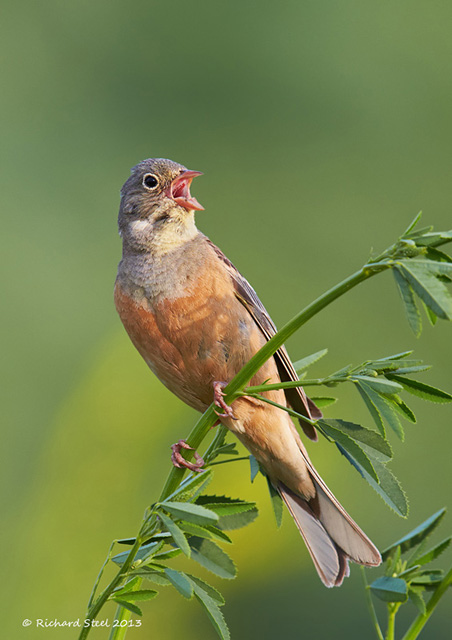 Ortolan Bunting has declined by 50-75 per cent in France over the last 30 years (Photo: Richard Steel)

LPO (BirdLife in France) considers this situation unacceptable. Confronted with the inaction of the French government with respect to full application of the law, LPO decided 10 years ago to start intervening on the ground during autumn migration to expose the practice and raise awareness among the general public.

Today, LPO works together with the Committee Against Bird Slaughter in an attempt to bring an end to this illegal trapping. The offending sites are identified from the air, birds are released from the cage traps and complaints are handed into the local police stations or the offices of the national agency for hunting and wildlife in the hope that enquiries will be made, and cases pursued rather than being shelved.

In 2013, the LPO sent a complaint to the European Commission, which then, in March 2015, informed the LPO that the French government had given a satisfactory reply to their questions, including that it was working with LPO on the issue and if the NGO had no more evidence, the Commission would close the complaint. LPO immediately sent a dossier with information from the previous poaching season to Brussels.

The LPO has continued sending proof to the Commission that the French government is doing nothing to stop the illegal trapping and that it has convicted very few of the hunters involved. On 16 June this year, there was some cause for hope. The Commission announced that it had sent a 'reasoned opinion' to the French government, which now has two months to satisfy the Commission that it was taking action to stop this illegal killing, or else the country would be brought before the European Court of Justice.