Conservationists are hailing the breeding success of Hen Harriers on Orkney as the population has reached a 20-year high of 100 breeding females producing over 100 chicks — a remarkable recovery for the species, which is facing tough challenges in other parts of the UK. The resurgence on Orkney of the Hen Harrier, a red-listed species of high conservation concern, follows a period of steep decline on the islands, particularly between 1980 and the late 1990s when populations reached their lowest level since detailed records began in 1953. 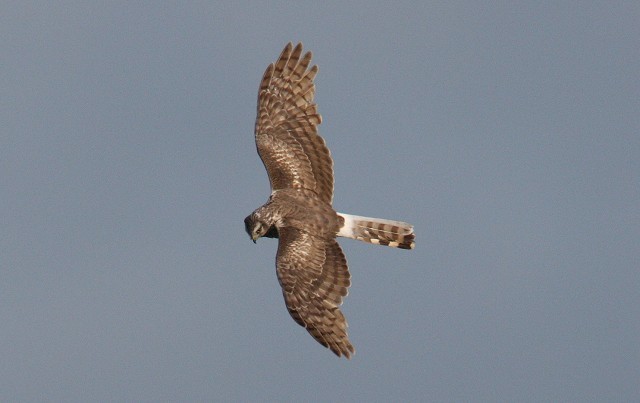 A study to determine the cause of decline, funded by RSPB Scotland, Scottish Natural Heritage and University of Aberdeen, has revealed a direct link between the number of sheep grazed on land favoured by hunting Hen Harriers and the success of the species. Food shortage was determined to be the primary cause of the fall in numbers, especially at the start of the breeding season when the males hunt for both themselves and the females in order to bring them into good breeding condition.

It was found that the number of sheep grazing on moorland fringes in the rough grasslands that constitute Hen Harrier hunting grounds doubled during the period of decline, resulting in habitat degradation and a shortage of prey. With a shift in agricultural support payments the number of grazing sheep was reduced by 20% between 1998 and 2008, and the fortunes of the Hen Harrier improved significantly as the areas they preferred to hunt in were allowed to regenerate.

Eric Meek, Orkney Area Manager for RSPB Scotland, said: "Although nearly all Hen Harrier breeding sites on Orkney are protected SSSIs, SPAs or RSPB reserves, the males range widely outside these areas while hunting, leaving them vulnerable to grazing regimes and habitat destruction. It is fantastic to see the Orkney population thriving after so many years of decline and demonstrates their ability to bounce back if given the opportunity. The story here, in effect, is that if the habitat is in good condition and the weather is not too awful and there is no illegal persecution, then Hen Harriers will thrive."

Gail Churchill, SNH's operations manager for Orkney, confirmed: "It is wonderful to see that the Orkney Hen Harrier population is once again thriving and we welcome the efforts that have gone into making this such a success story. The Orkney Hen Harrier scheme started in 2003 and was one of the first new voluntary initiatives proposed as part of SNH's Natural Care programme, and we are delighted that the fruits sown back then have contributed to the resurgence of the species, which is an important element of our local biodiversity. The Hen Harrier scheme — which ran until 2008 — allowed many farmers to manage the moorland and adjacent rough grassland areas, thereby increasing the feeding areas available for Hen Harriers. Now, management options are available through Rural Development Contracts which helps provide the platform for these magnificent birds to continue to thrive."