In the 50th anniversary of the first publication of the Red List of Threatened Species, an international team has suggested a Black List of destructive species introduced by humans. It has been 50 years since the International Union for Conservation of Nature (IUCN) first published its Red List of Threatened Species, which categorises species according to their risk of extinction. However, one of the major global consequences of human activities is the wholesale redistribution of species to areas outside their native range. These 'alien' introduced species have caused substantial damage to their new environment in many cases, including extinctions of native populations and species, as well as the disruption of soil nutrients and water cycling. Whether through the deliberate or accidental transfer of their populations, these transposed organisms are universal in their impact. In Europe more than 13,000 non-European species are recognised to live in the wild, while in Switzerland alone there are more than 900 such species.

In a newly-published essay, an international team of leading experts from four continents, in collaboration with the IUCN, has proposed a pragmatic solution to this problem. Their scheme allows ranking of alien species from different animal and plant groups into so-called "Black Lists" of harmful species, according to the known magnitude of their environmental impacts. It is designed to have a similar structure and logic to the widely adopted IUCN Red List. 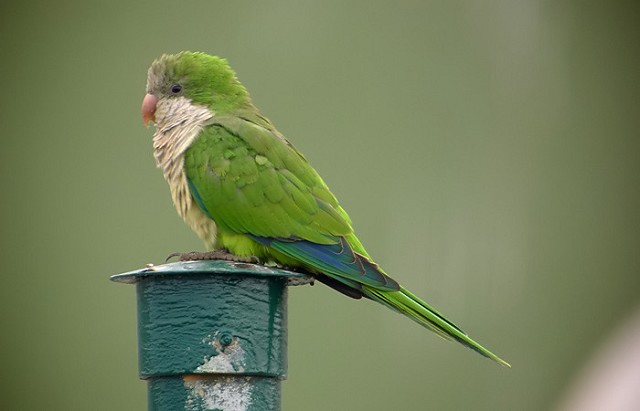 Monk Parakeet has been introduced in several European countries. This one was photographed in Spain (Photo: Craig Shaw)

Like the Red List, the proposed Black List can be used to prioritise species for action, as required by international policies on biological invasions. The scheme not only provides a basis for decision-making, but could also be developed into a formal indicator of progress towards the achievement of the aims of the Convention on Biological Diversity. This states: "By 2020, invasive alien species and pathways [should be] identified and prioritised, priority species controlled or eradicated, and measures in place to manage pathways to prevent their introduction and establishment."

Preventing and mitigating the impact of alien species is a major drain on limited conservation resources. There is therefore a considerable incentive to understand which species are currently, or likely to become, the most damaging (or conversely, which have minimal impacts), so that we can direct legislation and prioritise action to more effectively provide secure biodiversity, early eradication or long-term control programs. A fundamental problem is how to compare the enormous range of impacts attributable to diverse alien taxa, which act on different levels of ecological complexity and at different spatial and temporal scales.

The authors describe increasing levels of impact on native species. Scenarios are designed to allow the magnitudes of impacts caused by different mechanisms to be directly compared. An introduced species assigned to a higher impact category is considered to have had a worse impact on an environment than does a species in a lower impact category. The abstract can be read below:

Species moved by human activities beyond the limits of their native geographic ranges into areas in which they do not naturally occur (termed aliens) can cause a broad range of significant changes to recipient ecosystems; however, their impacts vary greatly across species and the ecosystems into which they are introduced. There is therefore a critical need for a standardised method to evaluate, compare, and eventually predict the magnitudes of these different impacts. Here, we propose a straightforward system for classifying alien species according to the magnitude of their environmental impacts, based on the mechanisms of impact used to code species in the International Union for Conservation of Nature (IUCN) Global Invasive Species Database, which are presented here for the first time. The classification system uses five semi-quantitative scenarios describing impacts under each mechanism to assign species to different levels of impact — ranging from Minimal to Massive — with assignment corresponding to the highest level of deleterious impact associated with any of the mechanisms. The scheme also includes categories for species that are Not Evaluated, have No Alien Population, or are Data Deficient, and a method for assigning uncertainty to all the classifications. We show how this classification system is applicable at different levels of ecological complexity and different spatial and temporal scales, and embraces existing impact metrics. In fact, the scheme is analogous to the already widely adopted and accepted Red List approach to categorising extinction risk, and so could conceivably be readily integrated with existing practices and policies in many regions.