Bittern has had a record year in England, with the highest number of booming individuals recorded since the 1800s, thanks to support from an EU conservation programme. Government figures recently showed that many threatened species are still declining, but this story demonstrates that it is possible to bring back species from the brink through specific conservation measures.

Funding from the European Union's LIFE-Nature programme, which supports environmental and nature conservation projects, has allowed a partnership of organisations including the RSPB to create and restore wetland habitats for Bitterns and other wildlife. The EU has also played a vital part in bringing this species back from the brink by protecting areas where the birds breed. The species was listed on Annex I of the 1979 EU Birds Directive, which means that the UK Government has to take special conservation measures to reverse declines and restore the UK population to a healthy state, or a 'favourable conservation status'. The main 'special conservation measure' available is designation and appropriate management of the key breeding and wintering sites as Special Protection Areas (SPAs). For example, the North Norfolk coast is part of a network of Bittern SPAs in the UK, five for breeding birds and ten for wintering birds. SPA status means that a site has robust protection from potentially damaging land-use change. 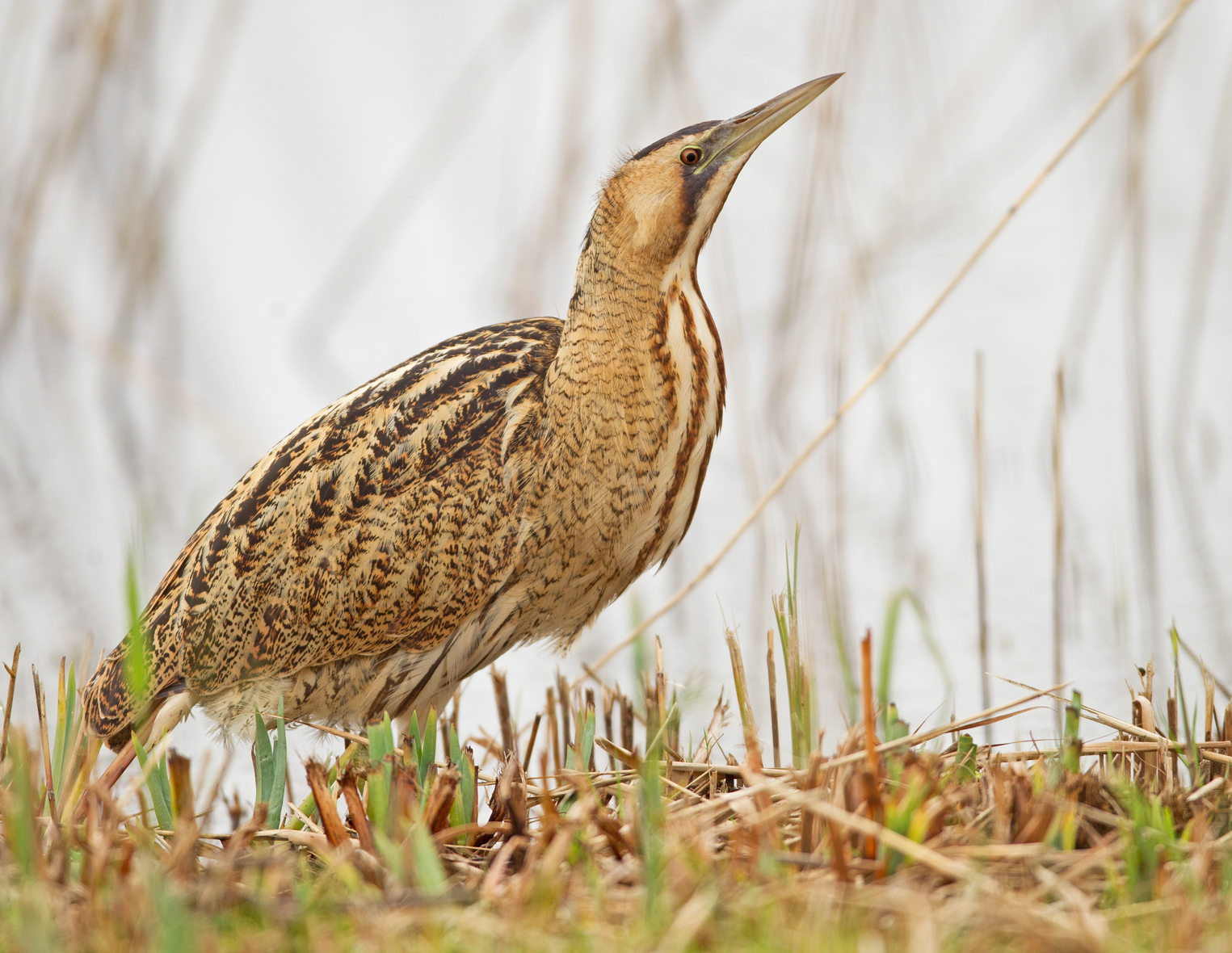 The loud 'booming' sound generated by displaying male Bitterns is a unique sound, reverberating across marshes for several miles, which earned it old country nicknames such as "miredrum". Because of their shy nature, they are can be extremely difficult to locate so numbers are calculated by the numbers of booming males heard. Each year an army of volunteers, landowners and nature reserve staff spends many hours tracking down the birds while they are booming. In 1997, at the start of the EU LIFE Bittern project, they found 11 booming males at seven sites. In 2014, there were 140 "boomers" across 61 sites. Fourteen of these sites are current or former gravel pits, brick pits or open coal mines, demonstrating the important role that restored quarries and similar sites can play in securing the long-term future of Bitterns and other wildlife.

RSPB Minsmere was the stronghold for this bird for many years. With a changing climate likely to result in the loss of freshwater coastal wetlands in the future, conservationists realised that it would be better if a number of suitable habitats were available in areas safe from sea-level rise, and spread across the country. A second set of funding from EU LIFE-Nature from 2002 to 2006 allowed the RSPB and others to create more than 300 hectares of new reedbed, around the same size area as the City of London. In addition, 350 hectares of reedbed were restored, and nearly 40 km of ditches were restored or created across 19 sites. Now if a particular Bittern population is struggling, there will always be birds from other locations to boost their numbers. This year, the highest number of Bitterns were at RSPB Ham Wall, Somerset, where 20 birds were counted booming. Somerset now has England's largest Bittern population. Further good news is that action for Bitterns has also benefited other reedbed species such as Water Voles, Great White Egrets and Small Dotted Footman moths. Functioning reedbeds also provide free services for people, including water filtration and flood mitigation.

RSPB Director of Conservation Martin Harper said: "Thanks to protection under European laws and key partners working together, Bittern numbers have been gradually climbing since 2000. Bitterns needed conservation on a country-wide, landscape scale and without the support of the EU's Birds Directive, which protects all European wild birds and the habitats of listed species like the Bittern, this would not have been possible. The Bittern success story should give hope that it is possible to recover threatened species and that it makes sense to protect the laws that protect nature."

RSPB scientist Simon Wotton added: "I've been working with Bitterns for 10 years and it is wonderful to see how they have responded to the habitats we have restored for them. They're amazing birds to watch so it is incredibly rewarding to see their numbers growing."

Environment Secretary Elizabeth Truss commented: "The Bittern's distinctive 'booming' call is just one way in which it is a truly special bird, and I'm delighted that future generations will have the chance to hear it. This success is down to the hard work of the conservation organisations, landowners and Government agencies who worked together to improve and create new reedbeds for Bitterns to breed in. This shows it is possible to reverse even serious declines in threatened species." 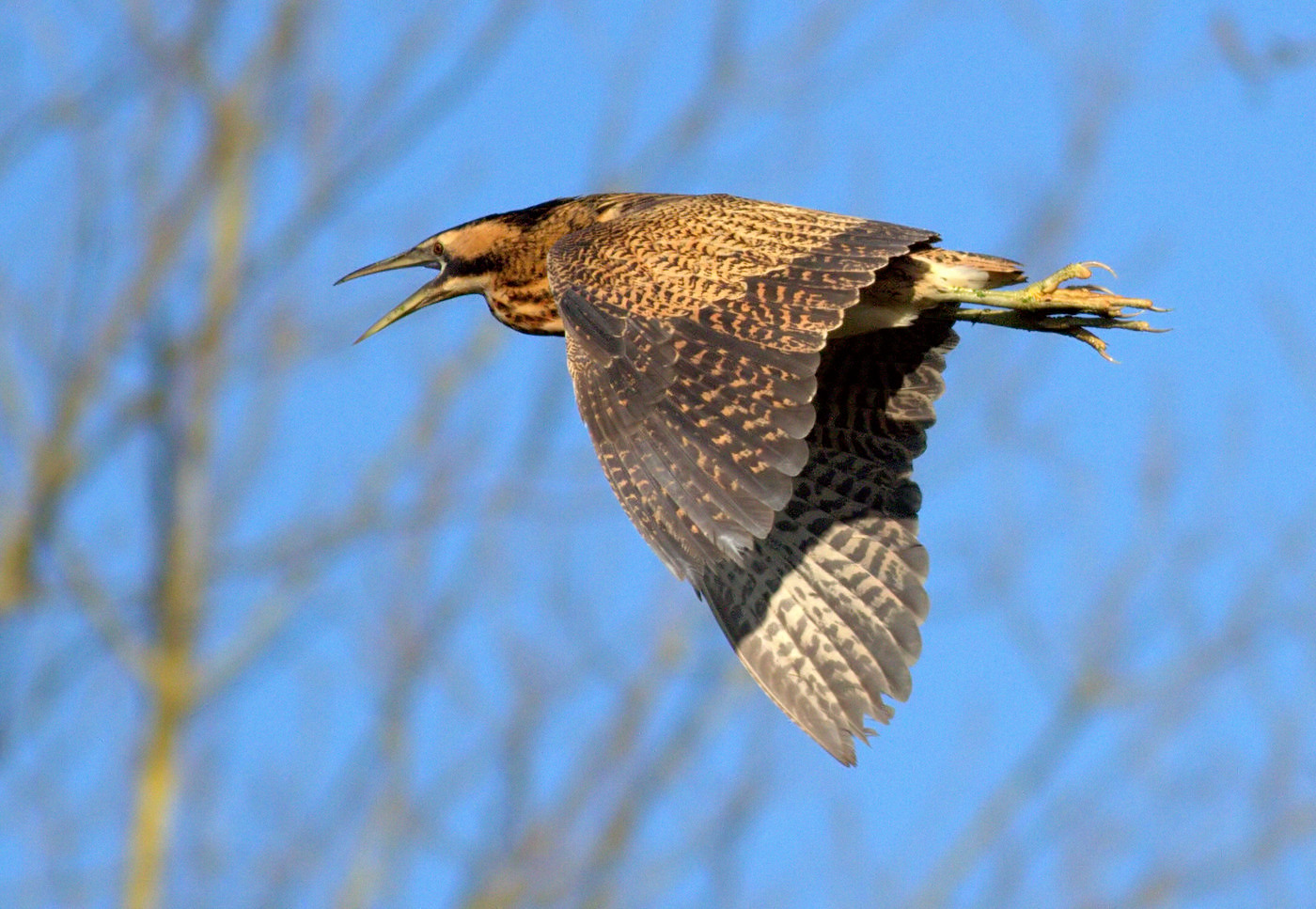 Simon Clarke, Somerset National Nature Reserves Manager at Natural England, said: "The Avalon Marshes in Somerset, including Natural England's Shapwick Heath National Nature Reserve, now supports a thriving population with around 45 booming male Bitterns and at least 20 recorded nests, whereas only seven years ago there were none. This impressive network of reedbeds and marshes has also supported breeding Little Bitterns and Great White Egrets in recent years, showing just what can be achieved through large-scale habitat restoration in a short space of time."