Images from cameras attached to the tails of Gannets have revealed their appetite for fishing-boat discards, soon to face a ban under reforms to the EU Common Fisheries Policy. The cameras captured more than 20,000 images, providing fresh insights into seabird behaviour. "All birds that had a camera attached photographed a fishing boat, showing how important fishing is," says Dr Steve Votier of Plymouth University, the study's lead author. "Of those a significant proportion was foraging at fishing boats, not just flying past."

The cameras, normally used for tracking pets, were originally attached facing forwards. But after failing to cope with the sheer force of the Gannets' characteristic sea-dive, striking the water at speeds of more than 60 miles an hour, they had to be reversed. Previously, researchers have tried monitoring the birds from boats or with GPS location trackers. The team hoped that, by employing the cameras, they would be able to reveal a more detailed picture of the birds' behaviour and the extent to which they rely on discards. 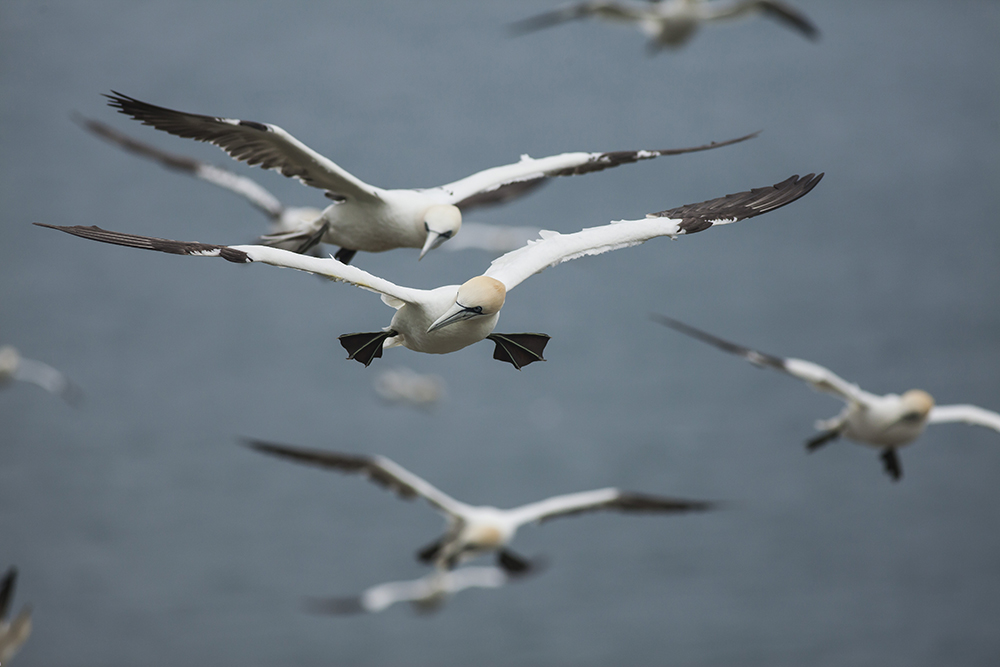 The team captured images from ten birds on a number of round-trips away from the colony and then combined the pictures with GPS data to tell the story of the birds' foraging journey. "There are at least two distinct parts to the foraging trip," says Votier. "A commuting part, where the birds travel quickly from A to B, and a foraging bout where they spend time in the same area — slowing down and performing lots of sharp turns."

Last week, EU ministers agreed to phase out the controversial practice of dumping unwanted fish back into the sea. Given the bird's apparent appetite for such discards, this could have been cause for conservation concern. But the study, published in PLOS ONE and supported by the Natural Environment Research Council, also revealed a continued willingness amongst the Gannets to forage in natural waters. "The males rely more heavily on the discards than the females, so they might be affected more," explains Votier. "But the Gannets seem to have quite a lot of flexibility and they might be able to switch back to natural foraging quite easily."

Votier believes that, while the ban on discards is necessary to cut waste, the consequences for ecosystems will need to be managed. "I'm all for it. I cannot see how fisheries can go on being managed in this way. It's wasteful, not sustainable and the discard ban is wholly appropriate. But there might be ecological consequences and we need to be aware of those so that we can manage them," he says.