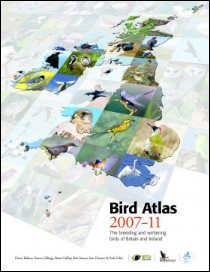 At the annual RSPB Members' Day in Birmingham, the RSPB Medal was awarded to the team behind the Bird Atlas 2007–11 in a special presentation.

The RSPB Medal was awarded last Saturday, and is the society's most prestigious award, recognising outstanding contribution to the cause of wild bird protection and countryside conservation. The award acknowledges the atlas's role as a valuable resource to everyone involved in conserving, researching or understanding Britain and Ireland's birds.

The award also recognises the very special partnership between the British Trust for Ornithology (BTO), BirdWatch Ireland and the Scottish Ornithologists' Club (SOC) which co-ordinated volunteers to visit all the 10-km squares in Britain and Ireland during the winter and the breeding season to record and count all the birds present. Over the four years of fieldwork, online data capture, preparation of maps and data analysis resulted in the publication of a book on the breeding and wintering birds of Britain and Ireland — Bird Atlas 2007–11 — in November 2013. The Atlas will inform bird conservation and provide an invaluable research resource for at least the next 20 years.

The medal acknowledges the outstanding contribution of over 40,000 volunteers who submitted records into the Atlas. A project of this scale could only have been successful with a skilled and enthusiastic team behind it. Receiving the medal last Saturday were the six authors of the book: Dawn Balmer, Iain Downie, Rob Fuller and Simon Gillings from the BTO, Brian Caffrey, from BirdWatch Ireland, and Bob Swann, from the SOC.

Dr Mike Clarke, Chief Executive of RSPB, who presented the medal, said that: "In charting geographical patterns and changes over time in the distribution and abundance of nearly 300 species, Bird Atlas 2007–11 is an extremely valuable resource, not only for the RSPB but for all organisations involved in conserving, researching or understanding Britain and Ireland's birds".

Representing the Atlas team, Atlas Coordinator and lead author Dawn Balmer commented: "The Bird Atlas project was a monumental citizen science effort, with thousands of volunteer birdwatchers mobilised to cover the key habitats across Britain and Ireland — from mountains, bogs, lochs and coastline to city centres, farmland and woodlands — recording the birds they found." She accepted the medal on behalf of the volunteer birdwatchers and the local volunteer Atlas organisers who worked tirelessly throughout the project and were such a pleasure to be with.

Bird Atlas 2007–11 has documented the changes in the breeding-season distribution of birds over the last 20 and 40 years, and changes in winter distributions over the last 30 years. The 20 million records from the surveys have been made available to RSPB and government agencies, who will use these data to support conservation action and policy through site and species safeguards, recovery plans and reserve management.