Belgium uses internet to get rid of invasive alien species

BirdLife in Belgium is using an online early warning system to report sightings of the spread of damaging introduced species.

Invasive alien species are animals and plants that are introduced accidentally (often by passengers on international flights) or deliberately (perhaps through trade) into an ecosystem where they are not naturally found. They can then spread rapidly and disrupt the complex and delicate ecological balance in the area.

There are different ways in which such species achieve this. Grey Squirrels (native to North America but now common in Britain) carry squirrel pox, which they are immune to but which led to huge declines in the population of the native Red Squirrels. In the last 500 years, mammals like rats, cats and mice have driven over 70 bird species to extinction.

While reports indicate that only one in 1,000 alien species becomes an ecological threat, those that do can cause enormous damage. Not only do they threaten endemic species with possible extinction, but invasive alien species also cost the EU an estimated €12 billion per year through destroyed crops, disrupted ecosystems and the spread of disease. Therefore, it is important to find out quickly when a new invasive species arrives and where it settles. 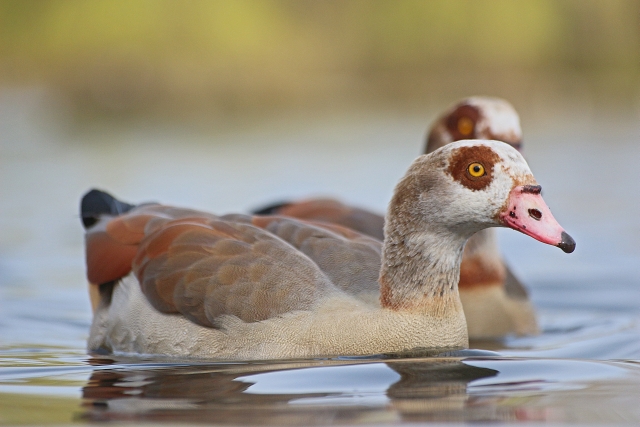 Egyptian Goose is an introduced species which is spreading rapidly through several countries in Europe (Photo: Chris Blake)

While the EU's regulation on the issue came into force only on 1 January, the BirdLife Invasive Alien Species Programme and Natuurpunt's (BirdLife in Flanders, Belgium) online early warning system has already been working on this issue since 2012, along with Natagora (BirdLife in Wallonia, Belgium) and respective local and national governments.

Through this early-warning system — built as an extension of the principal Belgian observation data portal — volunteers can report the sightings of invasive species with a photo and exact location. Environmental NGOs, governments or private land owners can subscribe to get an email when observations of invasive alien species are reported. The major advantage from this is that data from an already extensive network of observers can be used, and volunteers can deploy their familiar online data portal or mobile app for reporting observations.

The system has already seen success: volunteer data was used in an eradication program for Ruddy Duck, and is now being used in controlling exotic goose species. In order to have adequate estimates for Flanders of all invasive and other so-called 'summer geese' (domestic Greylag Goose, Egyptian Goose and Canada Goose, among others), these species are counted at major goose sites during the same weekend in July, when Canada Geese undergo a simultaneous moult of their flight feathers.

Natuurpunt coordinates a network of some 10,000 local volunteers organised in many local working groups, which forms the backbone of data collection of both exotic and native species. This year, approximately 15,000 geese were counted by about 200 volunteers. Casual observations or counts outside the selected counting areas are also used to complement the dataset.

Natuurpunt takes care of the technical aspects of the data-collection, while the Flemish government (INBO) takes care of the scientific analyses of the data, and shares its findings with the national government and EU. Eradication efforts in Flanders are mainly based on the results of this great collaboration between citizen science, NGOs and the government to protect the environment. ound that laws for native species generally afforded good protection, but monitoring and enforcement in the markets were lacking. Accordingly, TRAFFIC recommends that prosecution of traders found openly selling protected species is made an enforcement priority.