Back from the Brink. No 6

This is the sixth in a series of articles highlighting some of the remarkable success stories achieved by the RSPB though their work to save some of Britain's rarest birds. This week we look at the Corncrake, a species that used to be widespread and common across much of the UK. About 150 years ago it was noticed that they were declining from the east. This decline, thought to be linked to changes in the management of grass field and meadows, continued through the 20th century. By the 1990s Corncrakes were restricted almost entirely to the islands on the north and west coast of Scotland.

With the UK population in a critical state the RSPB undertook research into the needs of this secretive species. It was found that Corncrakes need tall (20 cm+) invertebrate-rich vegetation throughout the breeding season, and that the species is adversely affected by mechanical mowing. These findings enabled the RSPB to develop, and refine, management techniques, which were then trialled on reserves such as Coll and Islay. Measures included changes in mowing methods, such that fields were cut from the centre outwards, pushing birds towards cover in which they will be safe, rather than trapping them in the centre of the field. Other measures included changes in grazing management to provide areas of cover through the breeding cycle and the provision of Corncrake 'corners' and 'corridors' to ensure cover through the early and late parts of the breeding season.

Current signs for Corncrakes are encouraging. The population recovery, which began in the early 1990s, continues. A total of 1,042 calling males were located in 2004 through a survey of the Core Areas (Orkney and the Hebrides). The next challenge is to expand the species' range. The RSPB is undertaking a trial to re-establish Corncrakes in eastern England. Though this is still in its early days, a first breeding record at the release site is encouraging. 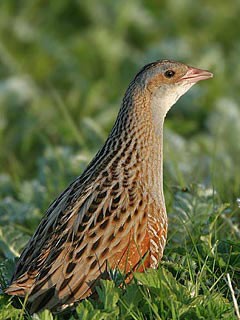