RSPB Scotland staff at the Loch Garten Osprey Centre are thrilled that the regular breeding female — 11-year-old EJ — has returned for the seventh time to the famous nest in the Cairngorms. In the early evening of Wednesday 25th March, one day earlier than she arrived last year, EJ, so named because of the identifying leg ring she bears with those letters, returned to the RSPB nature reserve with a freshly caught fish in her talons. 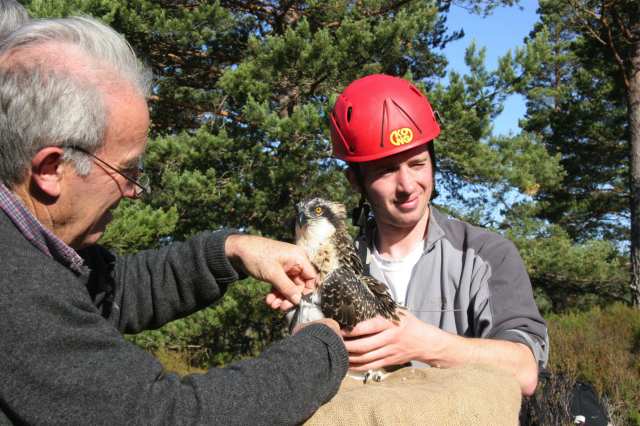 "She came back with a nice fish supper to help her settle in, so we can relax a little now and breathe a sigh of relief", said Richard Thaxton, RSPB Scotland site manager at Loch Garten. Hopes are high that a male suitor will now follow, ahead of the centre opening to the public on Wednesday 1st April. And following on from last year's popular addition of a webcam streaming live images of the nest site to anyone with an internet connection, people will again be able to watch proceedings minute by minute from the comfort of their own home.

Richard added: "We are really delighted to see her come back, as it is always comforting to get a familiar bird return with a good track record of success. She's travelled thousands of miles but is looking fit and healthy, and has already been nest-building in anticipation of the arrival of a mate. Many people remember the saga of two years ago, when she laid two different clutches to two different males, which resulted in no chicks surviving. But she has successfully fledged chicks in three of her six previous seasons with us, so she's not doing too bad. We're hoping she can build on that."

From 1st April the public are welcome to visit the famous Loch Garten, the site where Ospreys returned to Scotland in 1954 for the first time since becoming nationally extinct in 1916. Folk will again be able to follow the birds' exciting exploits by logging on a streaming webcam, which proved hugely popular last year.

"The response to the webcam last year was really quite extraordinary. We didn't expect to receive the volume of traffic to our website, and it was amazing how many messages of support that this encouraged people to send in to our web pages from all over the world. It shows what a huge appetite the public have to be kept abreast with what's going on in the natural world, and the growing popularity of nature watching as a hobby. We are very excited to be able to offer this again, and hope it delights and enthrals all who log on."

The Loch Garten Osprey nest webcam can be seen at www.rspb.org.uk/webcams/birdsofprey/lochgartenvideo.asp.

The Osprey Centre is open daily from 10am to 6pm from 1st April until the end of August.