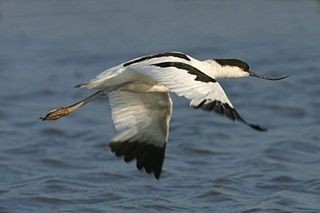 The culmination of 20 years' hard work by the volunteers of Upton Warren Wetland Reserve resulted in the ultimate accolade to all our endeavours when a pair of Avocets decided to nest. Avocet is classed as a rarity at the reserve with only five records before this year.

The birds arrived on 19th April and courtship rituals and mating were almost immediately forthcoming. Thankfully a scrape was made and a nest built on the island within the saline lagoons of the flashes area. The first of the four eggs was laid eight days after the initial arrival and incubation commenced from 29th April. Although the area is surrounded by fox-proof fencing, the safety of the island made life easier for the wardens and volunteers on a 24-hour guard. The main dangers at this stage were risk of flooding and egg collectors, who would have to negotiate treacherous sinking sand surrounding the island. Neighbouring Lapwing, Little Ringed Plover and Redshank shared in the suppression of avian marauders and so the scene was set and the vigil began.

For those who have not visited the reserve it consists of two separate and distinct wetland types. The larger 'Moors' area is freshwater consisting of varying sized pools, scrapes, islands, reed beds and a small area of fen and scrubland. The 'Flashes' is almost a unique site, in being one of only two inland saltmarshes in the country. Extensive work at both sides to reserve has attracted many locally rare species to breed such as Cetti's Warbler and Common Tern as well as five species of wader. The Flashes have seen a concerted effort to improve wader habitat over recent years where many islands, channels and miniature shallow lagoons have been created all by hand. This has undoubtedly gone a long way to enticing the Avocets and all the volunteers involved should feel rightly proud.

On April 23rd after what was a seemingly endless 25 days the first chick emerged at 05:15 and by 10:00 there were three. Later in the day the three chicks swam off their island to feed in the muddy shallows. As one parent continued to incubate the remaining egg it left the other with a hard job of protecting the three chicks against the opportunist corvids and gulls that had gathered close by. However, the incubation continued and to everyone's surprise, and 50 hours after the first egg, the fourth one hatched and with it the first and most worrying phase was over.

Hopefully in four weeks or so successful fledging will result and at this stage all the Upton Warren volunteers and birders will celebrate this most momentous event in the reserve's history. At the time of writing there are 20 wader chicks of four species including the four Avocet chicks in front of the main hide. 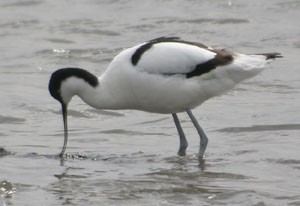 Location: The Flashes area is located off the A38 about 1 mile north of Junction 5 of the M5 Motorway and two miles SSW of Bromsgrove, Worcestershire - at approximately SO932673.

Visiting details: At the small roundabout adjacent to Webbs Garden Centre take the turn into the signed Worcestershire Education Centre Sailing Pool and use the left-hand car park. Proceed across right-hand car park through the buildings to the far right-hand side of the pool and then down marked steps to 'The Flashes'. Continue along the boardwalk to the third hide. At this time permits can be purchased at either the Sailing Centre or in the hide. 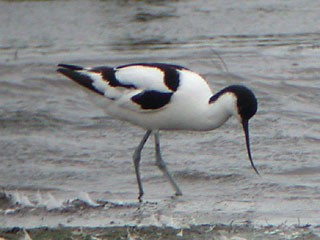