RSPB Scotland are appealing for information after a Black-throated Diver, one of Scotland's rarest birds, was found dead on the shore of Loch Gowan, near Achnasheen (Highland). The bird was discovered by local biologist Jim Raffell and was reported to the RSPB.

A post-mortem, carried out by Scottish Agricultural College vets on behalf of the nature charity, revealed that the bird had been shot by a "high-velocity projectile". Police enquiries have been unable to identify a suspect. The Black-throated Diver breeds on freshwater lochs, wintering at sea. It is a very rare breeding species in the UK, with the population (of around 240 pairs) confined to the north and west of Scotland. They are known particularly for their elegant summer plumage, haunting calls and their tendency to mate for life. This bird killed is believed to have been one of a breeding pair. 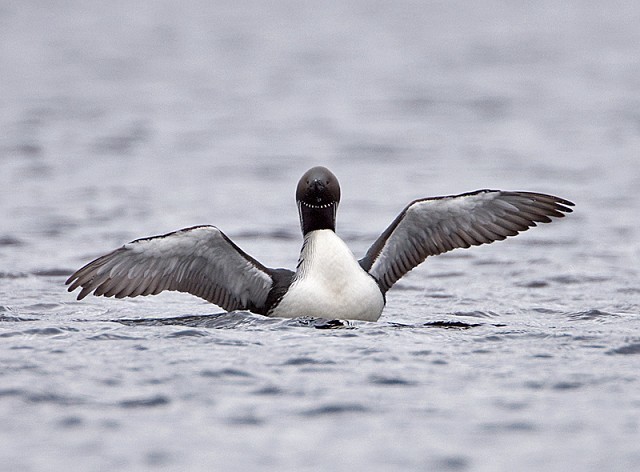 A spokesman for RSPB Scotland said: "This is an appalling and inexcusable crime. Black-throated Divers are stunning and very rare birds, with their UK stronghold in the Highlands of Scotland. It is truly shocking that one of these birds has been deliberately targeted, with a complete disregard for both the law and the rarity of this species."

Mr Raffell, a fisheries biologist with the Scottish Government, added: "To find a dead Black-throated Diver is very sad, but to then be informed that that it had been shot caused me much upset and made me very angry. How any person could deliberately shoot such a beautiful, enigmatic and uncontroversial bird is outrageous. I hope that by raising awareness of this crime, it will never be repeated."

The news comes hot on the heels of a press release, issued last week by RSPB Scotland, that demonstrated how artificial rafts covered in vegetation were helping to raise the breeding population. Since tethered rafts were introduced to lochs in the late 1980s, RSPB Scotland said numbers of breeding pairs had risen from 180 to 240 in 2012. You can read more on that story on the Birdwatch website.

Anyone who may have any information relating to this incident is asked to contact Police Scotland on 101, or RSPB Scotland on 0131 317 4100.