Barely more than a fortnight since it was announced that a Scottish-born Hen Harrier named Skylar had gone missing in suspicious circumstances, yet another satellite-tagged bird has suddenly vanished.

RSPB Scotland is appealing for information following the abrupt disappearance of Marci, a female Hen Harrier that was satellite tagged as a chick in 2018 as part of the RSPB's Hen Harrier LIFE project. 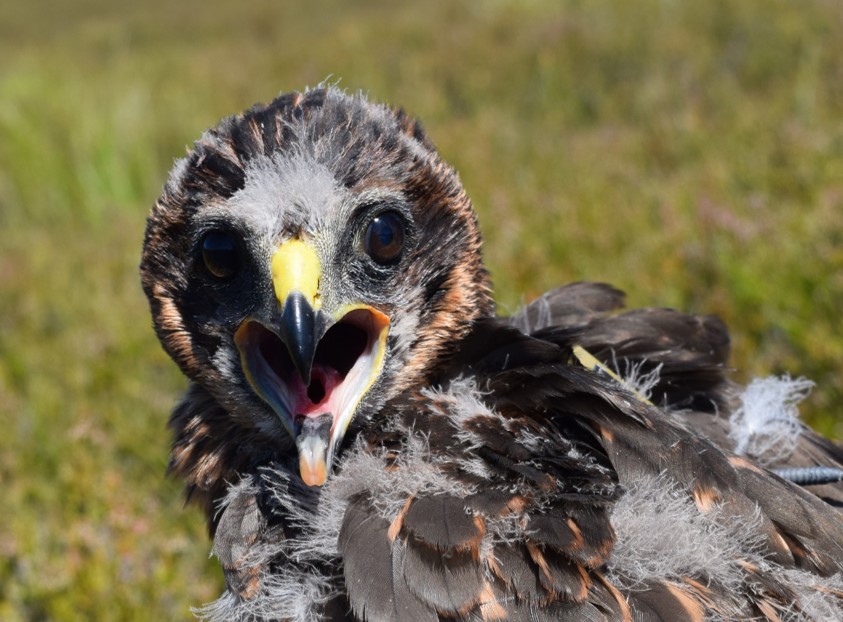 Marci, who fledged from a nest on National Trust for Scotland's Mar Lodge estate, went missing in an area notorious for bird of prey persecution. Her tag stopped transmitting on 22 April 2019. In August 2018, another young satellite-tagged harrier named Margot vanished on a grouse moor just a few miles from Marci's last recorded position.

Like Margot, Marci's tag was functioning normally until its sudden 'failure'. Marci had been exploring a wide area of North-East Scotland, with her last recorded position being in an area managed intensively for driven grouse shooting near Strathdon, west Aberdeenshire, in the Cairngorms National Park. Marci had been in this area for the previous three weeks with no indication of any technical issues with the tag. Subsequent searches by Police Scotland and RSPB Scotland revealed no trace of the bird or her tag.

The most recent UK Hen Harrier population survey revealed a worrying decline of 13 percent between 2010 and 2016, with an estimated 545 pairs across the country. While Scotland is the UK stronghold for the population with 460 of these, numbers there were down by 9 per cent since 2010 and 29 per cent since 2004.

Dr Cathleen Thomas, RSPB's Hen Harrier LIFE Project Manager, said: "These sudden disappearances of our satellite-tagged Hen Harriers are depressingly frequent; Marci didn't even get to make it through her first year before vanishing. The satellite tags are highly reliable so a sudden stop in transmitting gives us immediate cause for concern. If Marci had died of natural causes the tag should have continued to transmit, allowing our team to find her.

"A recent published study indicates that 72 per cent of Hen Harriers are being illegally killed on Britain's grouse moors, while another study found 31 per cent of tagged Golden Eagles in Scotland were illegally killed. Something has to change in the way our countryside is looked after, to help protect our iconic birds of prey in Scotland."

Ian Thomson, RSPB Scotland's Head of Investigations, added: "This is the latest in a string of similar incidents in western Aberdeenshire, and is further strong evidence of the systematic targeting of protected birds of prey on Scotland's driven grouse moors.

"In just the last few years, the illegal killing of a Common Buzzard, three Northern Goshawks and a Hen Harrier have been witnessed within a few miles of where Marci vanished. There have also been several confirmed poisonings; the filming of the illegal setting of traps; and the suspicious disappearances of several satellite-tagged eagles and other Hen Harriers. It is abundantly clear that current legislation is completely failing to protect our birds of prey, and robust regulation of the driven grouse shooting industry is both vital and long overdue."

If anyone can provide information about Marci or any illegal killing of birds of prey please contact Police Scotland on 101, or the RSPB's confidential raptor crime hotline on 0300 999 0101.