Supermarket chain Aldi is celebrating the first anniversary of an educational partnership with the RSPB by donating £775,000 from the sale of its carrier bags to the charity.

Funded by Aldi, the RSPB's Connecting Children with Nature project has already enabled more than 50,000 children to enjoy more than 75,000 hours of fun, excitement and educational nature experiences in 15 cities across Britain.

The funding, which is expected to reach over £2m by 2018, will support the RSPB's Connecting Children with Nature programme across schools, green spaces and RSPB reserves. RSPB-trained educators will visit primary schools and Early Years' settings.

Aldi's partnership with the RSPB aims to encourage young people to get out into nature to build their understanding and love of wildlife. By 2018, the programme aims to provide connection to nature experiences for more than half a million children across Britain. The scheme is funded solely by donations from carrier bag sales in Aldi's UK stores. In addition, the partnership is being used to highlight the environmental impact of plastic bags and the positive impact of the charge. Carrier bag single usage has fallen by 42 per cent over the period from August 2015 to January 2016.

Aldi has been donating the net proceeds from carrier bag sales to the RSPB since its partnership began in July 2015, ahead of the carrier bag levy, which came into effect in October last year. The supermarket was one of the first to charge for carrier bags in a bid to reduce usage and protect the environment, having done so since first opening its doors in the UK in 1990.

The entirety of the charge of 5p minus VAT is being donated to charitable causes such as the RSPB, as part of their three-year partnership with the charity. No deductions for administration charges are being made. 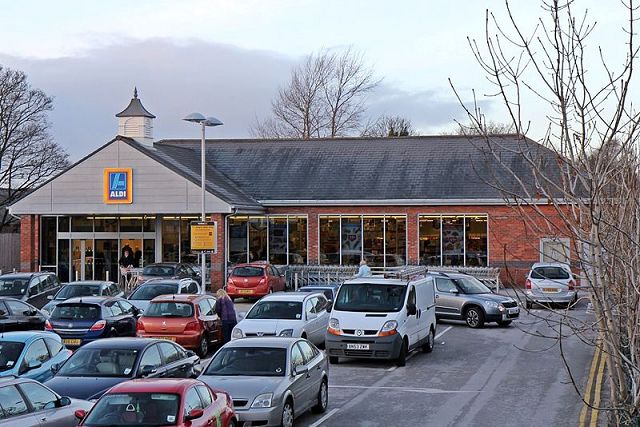 Aldi supermarkets such as this one in Neston, Cheshire, have been levying the carrier bag charge since last summer
(El Pollock/commons.wikimedia.org)

Martyn Foster, RSPB Head of Education, Families and Youth, said: "The radical decline in children's access to nature in the last three generations is well evidenced, and yet research shows that when children are connected to nature it has a positive impact on their education, physical health, emotional wellbeing, and their personal and social skills.

"Thanks to our partnership with Aldi, we're able to encourage young people to get out into nature in their school grounds and local green spaces, and to build their understanding and love of wildlife. It's crucial we provide the next generation with as many opportunities as possible to experience and enjoy the natural world, and most importantly, have fun."

Mary Dunn, Communications Director at Aldi, said: "It's an honour to celebrate our one-year anniversary in partnership with the RSPB and donate such a significant sum of money, which has already started connecting thousands of children with nature and the great outdoors. Reducing environmental impact has always been high on our agenda and we remain extremely proud to be one of the first supermarkets to charge for carrier bags as a way of doing this."

Since July 2015, the RSPB has offered free 90-minute nature experience sessions to primary schools in 15 cities across Britain. Close to 500 schools have taken up the offer, which includes a bio-blitz, a Big Schools Birdwatch session or a Giving Nature a Home sweep of the school grounds to show how pupils can encourage and help wildlife.

For more information about Aldi's partnership with the RSPB, click here.