Puffin numbers on Northumberland's remote Farne Islands may have fallen by an average of 12 per cent, according to early figures in the National Trust's five-yearly count.

Initial counts suggest the population has fallen by up to 42 per cent on one of the islands – much worse than expected. The last count took place in 2013, when nearly 40,000 breeding pairs were recorded. The Puffins have also returned four weeks later than usual to their nesting grounds on the windswept islands off the Northumberland due to prolonged harsh winter weather. 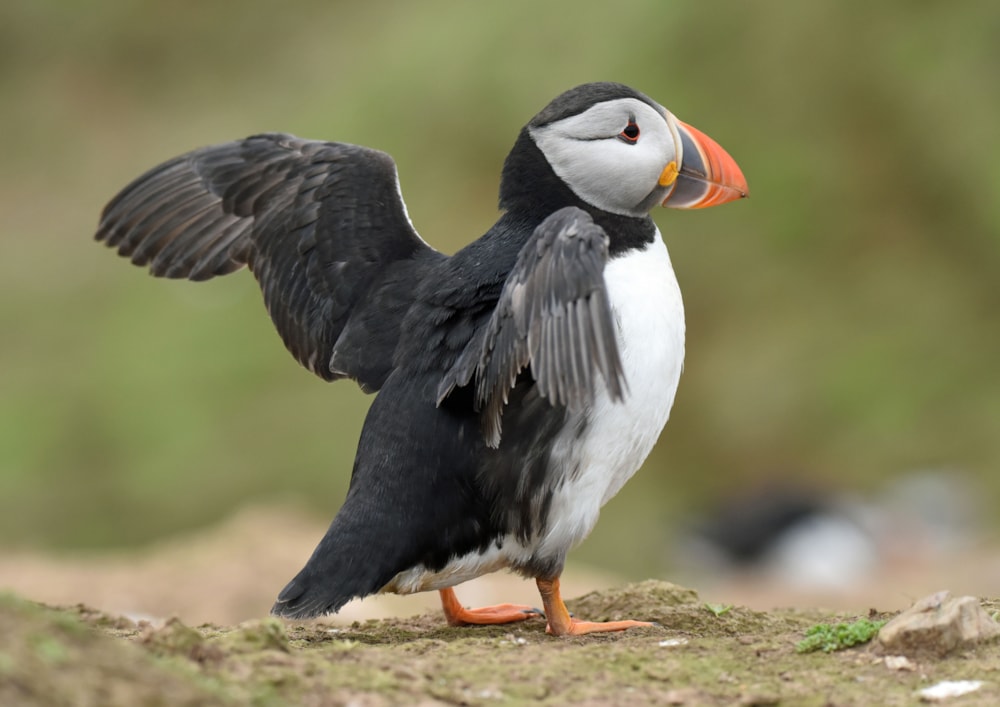 Puffins are in trouble on the Farne Islands (Tony Hovell).

The trust, which has been looking after the islands for 93 years, will step up monitoring in a bid to help better understand the alarming decline. Ranger Tom Hendry explained: "Initial findings are concerning. Numbers could be down due to stormy or wetter weather, as well as changes in the sand eel population, which is one of their staple foods.

"So far we've surveyed four of the eight islands where we conduct the census. Figures from the two largest islands are vastly contradictory, with numbers on Brownsman 42 per cent down, while recordings on Staple show an 18 per cent increase. We will now do some further investigations as to why this might be.

"Figures across the two smaller islands are more consistent, but numbers are still down by up to 33 per cent. We will hopefully have a much clearer picture towards the end of the count in late June. If the final results reflect this drop, this will increase the need for us to monitor these beautiful ‘clowns of the sea' more frequently.

"Puffins are notoriously difficult to monitor, which is part of the reason why they have not been monitored every year. Annual monitoring will help us discover the true picture and help track numbers against likely causes of population change, whether the causes are found to be changes to the weather as a result of climate change, changes in the sand eel population or something else altogether." 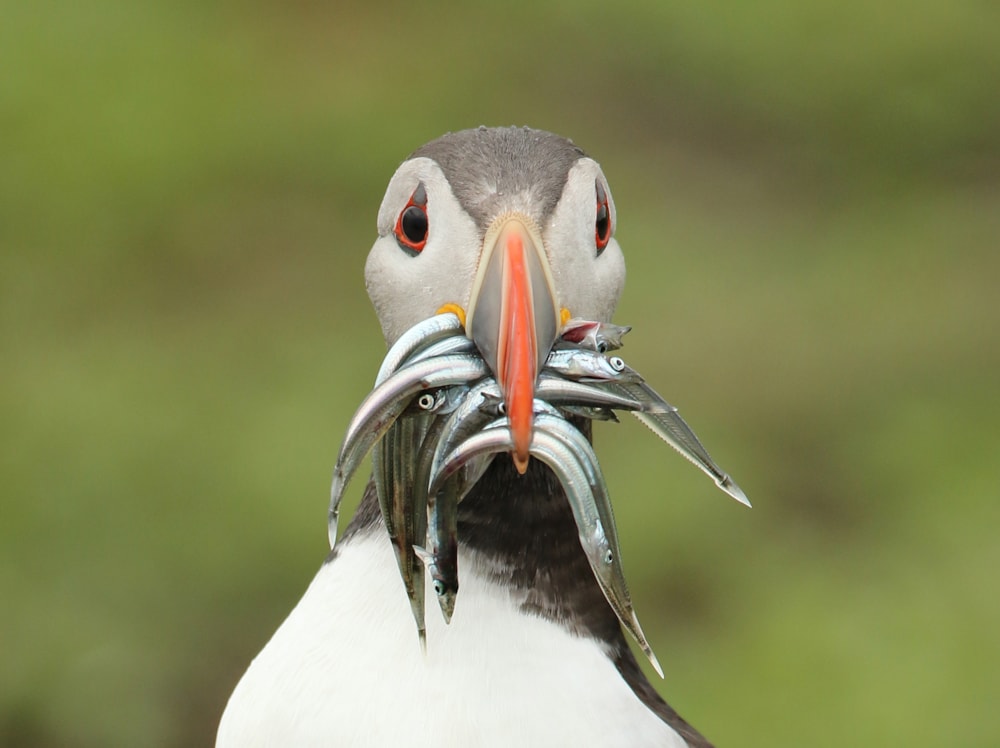 A Puffin with a beakful of sand eels on the Farne Islands (Jon Mercer).

Puffin was given Vulnerable status in 2015 by the International Union for the Conservation of Nature (IUCN) following widespread declines. The most likely contributors to this fall in numbers internationally include climate change contributing to food shortages and extreme weather, overfishing, invasive predators such as rats on some islands and marine pollution, in addition to other threats.

Puffin is also on the British Trust for Ornithology's Red List for species of conservation concern in the UK. Puffin, with its striking orange, yellow and dark blue beak (which goes dark in the autumn and winter) is less than 30 cm tall. They mate for life, but most likely separate over winter, pairing up again on returning to their breeding grounds in spring.

Puffin records on the Farne Islands date back to 1939, when just 3,000 breeding pairs were recorded. Every census until 2008 showed a steady increase – but in that year, numbers fell by a third, dropping from 55,674 to 36,835. Again, this decrease was thought to be largely due to the impacts of climate change. The last census in 2013 revealed there were 39,962 breeding pairs on the island.

The National Trust rangers live on the island from March to December each year to monitor Puffins and other wildlife, including Grey Seals, Arctic Terns, Common Eider, Guillemots and Kittiwakes.

As Puffins nest underground, the rangers will monitor the nests carefully to decipher whether burrows are occupied or not. Describing how they carry out the count, ranger Harriet Reid commented: "The first thing we do is arrange a grid over the most populated islands to determine the best locations to put at least 30 plots per island. This ensures we cover different habitat types and keep our plot selections random to reduce statistical error.

"We then put a stake in the middle of each plot and put a 5-m piece of string out, and use that diameter to check all the burrows around the central stake. We will also do a full census on the least populated islands, looking at every burrow.

"We'll be looking out for the first birds with fish in their beaks, a sure sign their burrows are occupied with a hungry 'puffling'.  We also look for external signs around the burrow to determine whether Puffins are using it, such as fresh digging, Puffin footprints, clearance of vegetation at the burrow entrance, hatched eggshells, or fish or guano in the entrance.  If we are unsure, it's only on this occasion that we'll put our arm down the burrow to gently and carefully feel for any occupants. We then carefully record our findings."

Puffins have traditionally done well on the Farnes, thanks to monitoring and protection from the rangers, good sources of food, a lack of ground predators and the availability of suitable nesting areas.

Tom Hendry concluded: "Predictions have been made that within the next 50-100 years these stunning birds will have completely died out on the Farne Islands. The Icelandic population in particular is really struggling, with exceptionally low productivity for [more than]10 years.

"The monitoring of Puffin numbers worldwide is therefore really important to discover whether the species can continue to survive. If we can carry out an annual census in as many places as possible, this will give us more of an indication as to what is impacting these truly special birds and give us insight into what else we can do here [and] at other sites across the world to help the species.

"If the causes of Puffin decline are what we suspect, it will require a bigger effort to encourage everyone to think about how we can prevent overfishing, reduce our use of single-use plastics and limit our use of non-renewable energy, but it can be done." 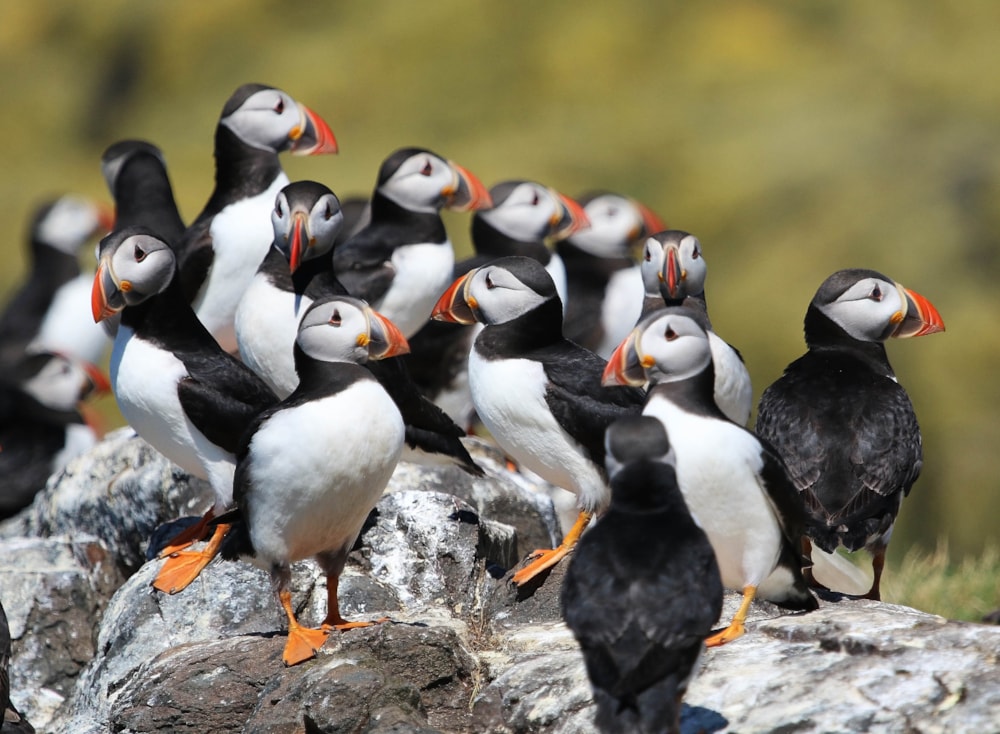 It could be that sights like this become a thing of the past on the Farne Islands (Andy Mould).

This year also marks the 25th anniversary of the Farnes achieving National Nature Reserve status. John Walton was property manager for the conservation charity at the time. He said: "This designation was the culmination of years of work, both locally and nationally, to having the islands acknowledged as being the 'best of the best' nature reserves in Britain. It opened up additional finance for the protection of the islands and helped fund studies and research.

"Partnership working with Natural England and other conservation agencies is essential in maintaining the islands as one of the best and most exciting nature reserves in the world."

The results of the census will be announced in October. For more information about the Farnes visit www.nationaltrust.org.uk/farne-islands.