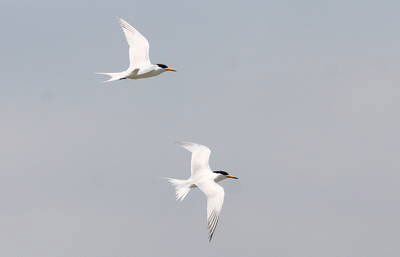 A recent study of Chinese Crested Tern highlights that the global population has fallen to less than fifty individuals, half what they were just three years ago.

The study believes that the main cause of this decline is an unregulated expansion in trade for seabird eggs, a local delicacy that has risen in demand alongside a thriving tourist economy. Without urgent action conservationists have given the bird less than five years before disappearing completely from its two remaining breeding areas.

Chinese Crested Tern is China’s rarest bird, listed by BirdLife International as Critically Endangered – the most severe threat category. First discovered in 1861 and rarely recorded since, Chinese Crested Tern was largely presumed extinct until 2000, when four adults and four chicks were found amongst a colony of other tern species on Matsu, an island off the coast of Fujian Province. In 2004, it was discovered breeding at another site: Jiushan Islands, on the coast of Zhejiang Province of eastern China. At present these are the only known breeding sites in the world.

"We all thought we had lost this species sixty years ago and were so happy to hear of its rediscovery in 2000," commented Simba Chan, Senior Conservation Manager at BirdLife’s Asia Division. "Its survival in Fujian and Zhejiang waters was probably due to the tension between Beijing and Taipei."

"It would be such an irony if the Chinese Crested Tern survived amid the hostility in the Taiwanese Strait, yet becomes extinct now the relationship between Beijing and Taipei gradually normalises," he added.

"Both sides of the Strait should work together to save this, the rarest bird in China - otherwise it will be sure to follow the Baiji Yangtze River Dolpin as another ecological tragedy of the early 21st century."

The recent survey, undertaken by a Chinese survey team, is the first time Chinese Crested Tern have been surveyed over successive breeding seasons.

"Compared with 2004, the population size has decreased by more than 50 percent," said Dr Chen Shuihua, who led the Chinese Crested Tern survey team. "Our investigation indicated that its survival is under very severe pressure and on the verge of extinction."

The study suggests that egg-collecting poses by far the most dramatic threat to Chinese Crested Tern, whereby seabird eggs are collected by local fishermen in the belief that wild eggs have more nutritious value than poultry eggs.

"With rapid economic development along the east coastal area in China, tourism and catering have also developed rapidly," explained Dr Chen. "As a result a large number of sidewalk snack booths have emerged in the coastal areas of Zhejiang and Fujian."

Seabird eggs have become a popular delicacy, yet there is little awareness that some of these eggs may come from threatened species. The report indicates that the going rate for one seabird egg at Juexi (nearby the Jiushan Island breeding colony) was approximately 15 Chinese yuans ($2USD) in 2005. In two years this price has more than doubled: seabird eggs now sell for 35 Chinese yuans (about $4.5USD), encouraging more people into the egg-collecting trade.

In 2005 and 2006, the Chinese Crested Tern breeding colony disappeared altogether on Jiushan Island, most likely a sign of breeding failure caused by egg-collecting. Subsequent findings have reinforced this opinion: "We saw few newborn seabirds in our 2006 and 2007 breeding season surveys," added Dr Chen.

BirdLife International are among those putting together an action plan that will draw together measures needed to save Chinese Crested Tern. Among the actions needing urgent implementation are: enhancing protection of breeding habitats, stationing wardens, regular monitoring, and regulations for selling and collecting of seabird eggs in eastern China.

"China has a good record on taking action to save other bird species from extinction - this alarm-call to save Chinese Crested Tern has hopefully come just in time," said Simba.