The fortunes of a charismatic farmland bird appear to have improved following incentives offered to farmers to make simple changes to the way they manage their land, according to a new study. The results of the work prove that more investment from government in agri-environment schemes would make a real difference to our threatened species. 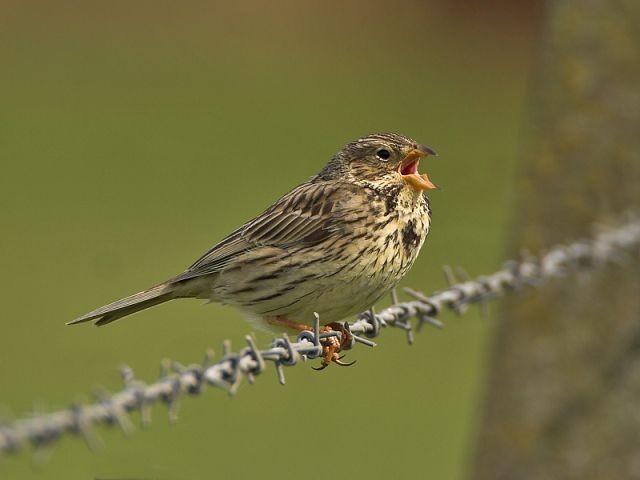 The Corn Bunting, known as 'the fat bird of the barley', was once common on British farm and croftland as far north as Shetland, but suffered a decline of 86% in the UK between 1967 and 2003. The Scottish population of the red-listed species is now just 800 territorial males, concentrated mainly in the eastern lowlands from Moray to Fife, and with isolated populations in the Outer Hebrides and Inverness-shire. All of these populations are still falling, except on the Western Isles where numbers increased by over 20% from 111 to 134 territorial males between 2006 and 2007, after many years of gradual decline. This is thought to be a response to a scheme introduced in 2004 which pays crofters to stack a part of their grain crop in the autumn. This provides a valuable winter food source for Corn Buntings which is otherwise lost when the crop is stored in black plastic bales.

Jamie Boyle, RSPB Uist Warden said: "The changes in harvesting techniques in the Uists unfortunately removed a major winter food source for Corn Buntings. Farmers now generally harvest crops early before it comes to seed, and wrap them up in big plastic bags to store as silage over winter. By offering payments to crofters, we seem to have been able to help the Corn Bunting at the same time as preserving a traditional form of agriculture in the Uists." 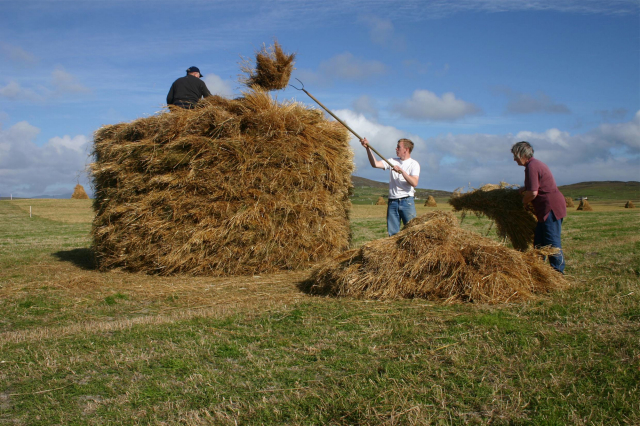 Now a new study published today in Bird Study, the journal of the British Trust for Ornithology, shows that a specially targeted suite of agri-environment measures in eastern Scotland (Aberdeenshire and Fife) seems to be helping the species there too. Allan Perkins, author of the new study, said: "The Corn Bunting has suffered drastic declines as intensive arable farming has progressively removed suitable nesting habitat and reduced the availability of grain and weed seeds as key winter foods and insects that are fed to chicks. Understanding how to restore the birds' needs in concert with modern arable farming is the challenge we face."

For this reason, the RSPB along with Scottish Natural Heritage (SNH) and the Farming and Wildlife Advisory Group (FWAG) introduced Farmland Bird Lifeline (FBL), which has provided funds for farmers to manage for Corn Buntings, by providing nesting and foraging habitats in summer and leaving crop stubbles and unharvested cereals over winter as a source of grain and seed food. The new study compared Corn Bunting populations on farms taking part in FBL with those that didn't, in both 2002 and 2004. Allan Perkins said: "What we found was that farms which took part in our scheme halted the Corn Bunting decline, but that numbers continued to fall elsewhere. We are now assessing whether the Scottish Government's agri-environment scheme - the Rural Stewardship Scheme - has had similar effects since 2002. It remains vital that the Scottish Government properly funds agri-environment schemes in the future to provide a solid platform for the recovery of species like the Corn Bunting."

Farmland Bird Lifeline is an RSPB initiative, supported by SNH and with farm planning by FWAG. It has been running in east Scotland since 2002 and provides financial encouragement to farmers in Corn Bunting 'hotspots' to manage land to favour Corn Buntings and other farmland birds. 31 farms in Aberdeenshire, Fife and Angus have been monitored during summer and winter over the past five years. An average of 129 ha/year of land has been directly managed for Corn Buntings across these farms. The planned programme of work has attracted grant aid from both Scottish Natural Heritage and the Scottish Executive (in the form of the Biodiversity Action Grants Scheme). We are spending an average of approximately £20K/year directly on land management as part of this work.