Advice to leave 'lost' fledglings alone this spring and summer

In spring and summer, the RSPB's Wildlife Enquiries Team receives lots of calls from well-meaning people about cute and apparently helpless baby birds they have discovered on the ground, and the charity is urging people to resist the temptation to intervene. Chicks that have recently left the nest appear fully feathered and spend a few days hopping around the garden in broad daylight, hence why so many members of the public are convinced they need rescuing.

Richard James, one of the RSPB's wildlife advisors, said: "Just before baby birds are ready to tentatively extend a wing, wiggle a tail feather and take flight for the first time, they leave their nest. These youngsters may spend a few days scurrying around on the ground until they are fully fledged and able to fly. It's vital that people resist the urge to intervene — these baby birds might look cute and helpless, but this is a natural part of the bird's development, so keep your distance and step away."

"Another common fear is that the chick has been deserted by its parents. However, they are extremely unlikely to be abandoned. The adult birds are probably off gathering food or more likely hiding nearby with a beady eye on their young, waiting for you to back away."

Parents know best and are more than capable of looking after their own. "There are plenty of other things you can do to help birds and other wildlife in your garden, though. Putting out food and fresh water, erecting a nest box, planting nectar-rich flowers or letting a small corner of your lawn go 'wild' are all great ways of giving nature a home." 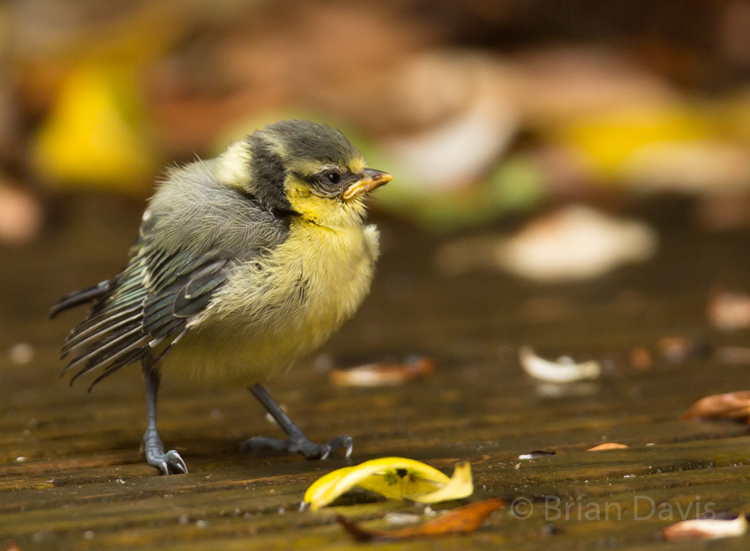 Fledgling Blue Tits like this one may look helpless, but the reality is likely quite the opposite (Photo: Brian Davis)

Removing a young bird from the wild significantly reduces its chances of long-term survival. Adam Grogan, Senior Scientific Officer for the RSPCA says: "Our wildlife centres care for more than a thousand alleged 'orphaned' fledglings each year, picked up by well-meaning people. Most of these birds are not orphans and would have had a better life in the wild. Unless a baby bird is clearly a nestling, or is a fledgling that is injured or in immediate danger it is best to leave them alone."

There are only a few situations when the public should lend a helping hand:

Injury: if an injured fledgling is discovered this should be reported immediately to the RSPCA on 0300 1234 999. Sometimes local vets treat wild birds for free, but please check with them first.

Nestlings: if a baby bird is discovered on the ground that is either unfeathered or covered only in its fluffy nestling down, it has likely fallen out of its nest ahead of schedule. Very occasionally it is possible to put these babies back in their nest, but only if you are 100% positive of the nest it has fallen from and it's safe to do so. It is also important to remember that sometimes a parent bird will intentionally eject a chick from the nest if they sense it has an underlying health problem or is dying. It's a harsh truth to stomach; as humans we want to fix things, but sometimes we need to allow the law of nature to run its full circle.