The Liben Lark, with a population of possibly fewer than 100 birds, is widely tipped to become mainland Africa's first recorded bird extinction, unless urgent action is taken to prevent its demise from the only area it now inhabits: a single grassy plain in southern Ethiopia.

Classified as Critically Endangered, the highest level of threat, this globally threatened bird has now been thrown a lifeline thanks to funds raised by the British Birdwatching Fair at Rutland Water last August. Birdfair organisers Martin Davies (from the RSPB) and Tim Appleton (from the Leicestershire and Rutland Wildlife Trust) presented a £242,000 cheque to Dr Marco Lambertini, BirdLife International's Chief Executive, at an special reception on 4th March 2011 hosted by His Excellency Berhanu Kebede, Ethiopia's UK Ambassador, at the Ethiopian Embassy in London. 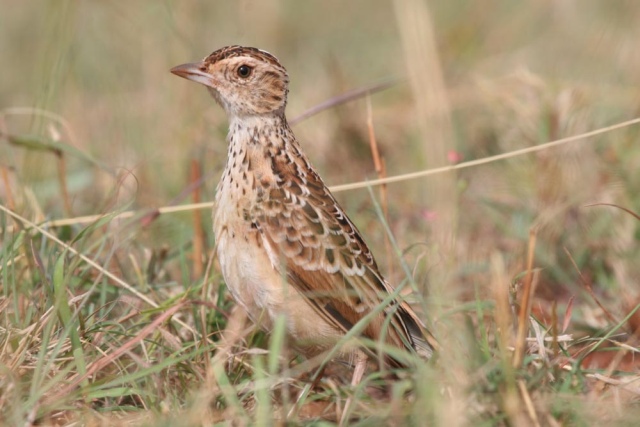 These funds will be used by the Ethiopian Wildlife and Natural History Society, the BirdLife Partner in the country, to work with local communities to reduce the impact of overgrazing livestock and to prevent conversion of the land to arable farming. Helping the grasslands recover will benefit both the lark and the pastoralists living there.

Man-made and natural phenomena all conspired, historically, to ravage Ethiopia's wildlife riches and this landlocked African country now has 22 species of bird facing extinction. Conservationists hope that the proceeds from the 2010 British Birdwatching Fair will help turn the tide and save the Liben Lark and a range of other highly threatened species. A huge mural (16ft × 4ft) portraying all the endemic and threatened birds of Ethiopia, which was painted by more than 40 wildlife artists at the 2010 Fair, was put on display at the Embassy reception. It will soon be heading out to Ethiopia, where it will go on permanent display in Addis Ababa to help raise awareness of these bird species and their plight.

Martin Davies, one of the fair's co-founders and key organizers, said: "Ethiopia has a remarkable natural heritage and is hugely rich in species found nowhere else in the world. Over 840 species of bird have been recorded in Ethiopia, 17 of which are unique to this country and 29 others nearly so. Unfortunately, this wonderful wildlife is under increasing threat and we hope that the proceeds from the event will help the Ethiopian Wildlife and Natural History Society and BirdLife International to take the urgent steps needed to secure the future of this country's unique birds. We also hope that the event will help raise the international profile of this wonderful country, so rich in wildlife."

"Once again Birdfair have delivered a huge boost for conservation. This money will be used to secure a future for Southern Ethiopia's incredible birds", added Dr Marco Lambertini, BirdLife International's Chief Executive.

Ethiopia's UK Ambassador, His Excellency Berhanu Kebede, said: "Ethiopia's biodiversity resources are under critical threat. Growing human and livestock populations pose the single most serious problem, resulting in deforestation, overgrazing, soil erosion, and desertification. To reverse the situation, the government of Ethiopia has promulgated laws and put in place the appropriate institutions. Significant achievements have been made in restoring the fauna and flora of the country; hence the percentage of land covered by forests has grown from three to nine per cent within five years."

"On behalf of my country, I'm delighted that Ethiopia's unique birds have been chosen as a beneficiary of the British Birdwatching Fair. It is fantastic that British birdwatchers have a passion for conserving Ethiopia's birds. With 4 out of 10 of Africa's birds having been seen in Ethiopia, my country has a great deal to offer visiting birdwatchers and we believe that eco-tourism will be vital in helping to protect our unique wildlife and landscapes."

Another Ethiopian endemic species in trouble is the grandly named Prince Ruspoli's Turaco. This macaw-sized bird with scarlet and navy-blue wings, long tail and green-and-white head was first found among the personal effects of the Prince after he was crushed to death by an elephant in 1893. As the unfortunate nobleman had not had time to label the specimen, its origins remained a mystery for half a century before the species was seen in the wild by a Cambridge naturalist in southern Ethiopia. The other species set to benefit from the proceeds of the Birdfair include the Ethiopian Bush-crow and the White-tailed Swallow.

The LRWT's Tim Appleton, the fair's other co-founder and co-organiser, concluded: "Since 1989, the British Birdwatching Fair has raised almost £2.5 million for global conservation. Beneficiaries have included threatened species, spanning the globe from albatrosses in the Southern Ocean to rainforest birds in the Philippines. This is a terrific achievement for an event which has its home in a few fields in Leicestershire over one weekend each year. Everyone involved in the Fair, from visitors, exhibitors and volunteer supporters alike, can be justifiably proud of what they have helped achieve."

The 22nd British Birdwatching Fair was held at Egleton Nature Reserve Rutland Water from Friday 20th August to Sunday 22nd August 2010. More than 350 exhibitors and 22,000 visitors attended over the three days, making it the largest event of its kind in the world.