A line in the sand

Irvine beach was transformed into a massive work of art yesterday [27th September], as the campaign to stop the building of a new coal-fired power station at Hunterston continued. Spread across the shoreline were giant sand drawings illustrating the main themes of the campaign; the effects of emissions on climate change and habitat loss for wildlife.

The emotive images were the handiwork of world-renowned sand and ice artist Jamie Wardley. With the help of a team of volunteers, he was able to convert the local beachfront into a public gallery, before the unique pieces were swept away by the advancing afternoon tide. 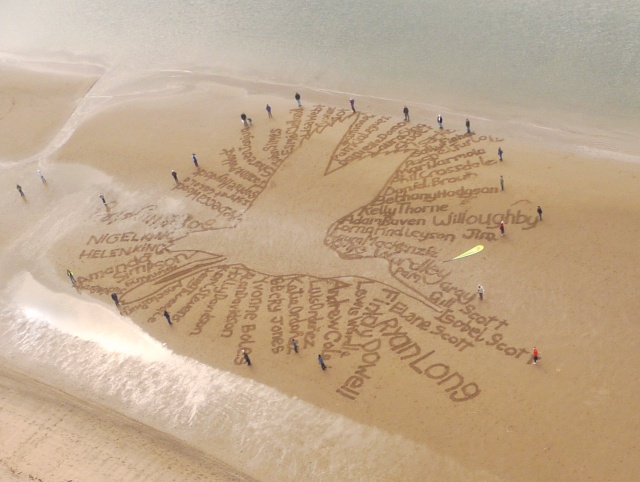 The sand art piece on the beach at Irvine. (Photo: Aerial photography by www.blueriverstudios.co.uk)

There has been a huge range of opposition to the development proposal, with more than 16,000 people registering their anger at the plans with the Scottish Government. RSPB Scotland, WWF Scotland, FoE Scotland and SWT, along with other charities and faith groups have all come together in a bid to stop the damaging scheme. If allowed to go ahead, the 1,852MW station would make a mockery of the Scottish Government's world-leading ambitions to reduce our greenhouse gas emissions and tackle climate change.

Jamie said: "I wanted to create something that would help people sit up and take notice of the issues surrounding Hunterston power station. As so many people felt so strongly about the campaign I decided to use their names to make a visual petition, creating images of the birds in flight that are likely to be affected by the proposal. The birds that we made on the beach had an incredible presence on this day as some were up to 100 meters across, yet their rapid disappearance by the incoming tide holds poignant significance in terms of the environmental impact a new coal-fired power station would prove to have."

"The second image of the girl's face in the dry river bed questions our responsibility to future generations. At Hunterston we have the opportunity to make a decision that is right for the future and right for now." 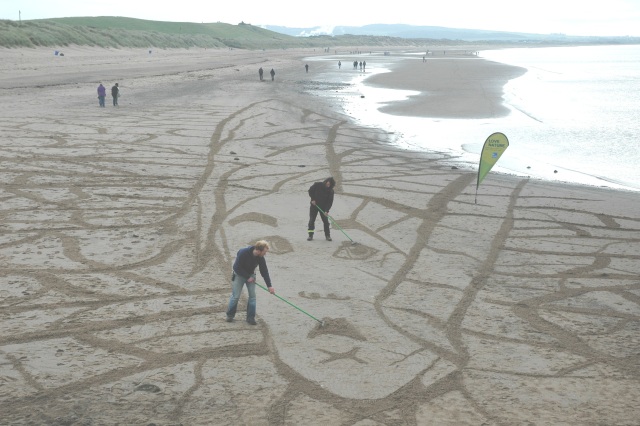 The second sand art piece on the beach at Irvine. (Photo: RSPB Scotland)

Anne McCall, RSPB regional director for South and West Scotland, added: "We're very grateful to Jamie for helping us draw attention to this development. It is clear from the support we've had today, and indeed throughout this campaign, there are many people against this scheme and rightly so. Not only will it permanently damage the best remaining intertidal mudflat on the outer Clyde, important for tens of thousands of birds and designated as a SSSI, it would also be a step back for Scotland in our aim to become a world-leader in reducing greenhouse gas emissions. As a country, we should instead be investing in clean, green, renewable technology in the right places."