A landmark in White-tailed Eagle history

The UK's breeding population of White-tailed Eagles - all of which are in Scotland - has risen dramatically to its highest number since the reintroduction programme began more than 30 years ago. Figures from this year's survey show there are now 42 territorial breeding pairs of the UK's biggest bird of prey, an increase of six pairs since last year. It has also been the most successful year for the number of chicks produced, with 24 successful broods fledging 34 young birds. 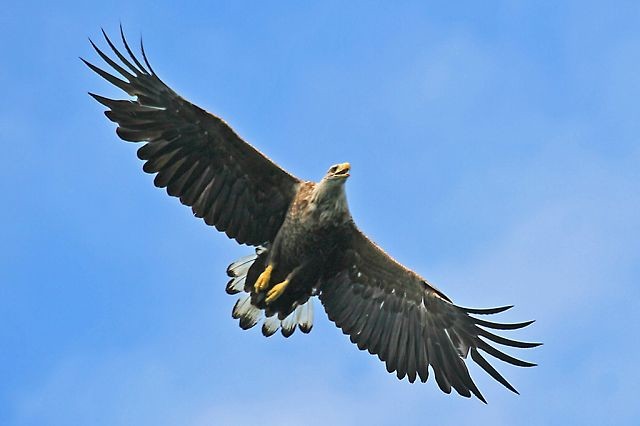 When added to the young birds that have yet to find a mate and establish a territory, there are probably now around 200 individual White-tailed Eagles resident in Scotland, giving tourists and wildlife-watching enthusiasts their best-ever chance of witnessing these spectacular and inspiring birds, often referred to as "flying barn doors" due to their sheer size. The on-going monitoring of White-tailed Eagle - also known as the Sea Eagle - is conducted by the Sea Eagle Project team, which includes RSPB, Scottish Natural Heritage and Forestry Commission Scotland.

Skye, Mull and the Western Isles are still the bird's stronghold since the species was brought back from UK extinction by reintroduction programmes, first on the island of Rum from 1975 to 1983 and then on Wester Ross from 1993 to 1998. Now the birds are beginning to significantly expand this range, and this year breeding pairs have established territories as far south as the Argyll islands and west on to the mainland in the Highland district of Lochaber.

Now the final phase of the programme to establish a population across Scotland is introducing chicks taken from nests in Norway to the east coast. Fifteen chicks were released in Fife at the beginning of August, and up to 20 young birds from Norway will be released each year for the next four years. It is hoped that this population will eventually mix with the west-coast birds and set up territories right round the suitable coastal habitats of Scotland. The Irish have taken similar steps to reintroduce White-tailed Eagles in the Killarney area of South West Ireland, and a feasibility study is being conducted to identify sites suitable for an English reintroduction project. 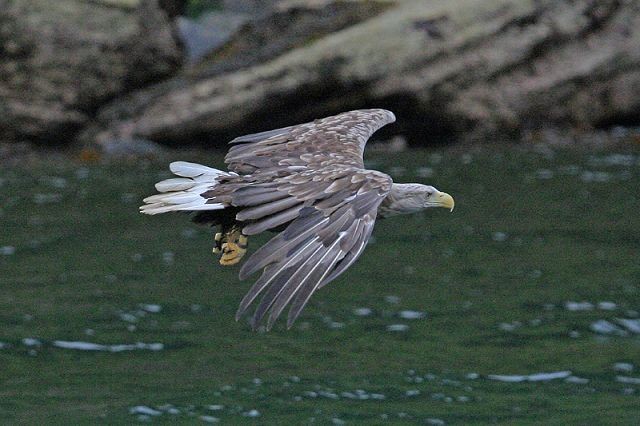 Jeremy Wilson, head of research at RSPB Scotland and the chairman of the Sea Eagle Project Team, said: "It has been a fantastic year for these stunning birds, which are now firmly established as a totem of the incredible natural heritage that Scotland plays host to. This breeding population is likely to continue to rise in coming years as juveniles from the reintroduction programmes reach sexual maturity, find vacant territories and pair up with a mate, with which they remain faithful for life. Eventually, as they continue to spread out, and west- and east-coast populations meet, we can expect to see these majestic birds all around Scotland's coast, bringing this fantastic and inspiring spectacle to people throughout the country."

Mull's White-tailed Eagles have become a firmly established tourist magnet, pulling in thousands of wildlife enthusiasts who boost the island's economy by as much as £1.7 million annually, according to a recent economic survey. The 350,000 visitors who go to Mull every year spend £38 million on the island, and of this between £1.45m and £1.69m is attracted by the presence of the eagles. Andy Douse, ornithologist with SNH, said: "Continued steady progress of sea eagles on the west coast of Scotland is excellent news. However, SNH considers the reintroduction programme started on Rum to be incomplete, which is why we have included White-tailed Eagles in our Species Action Framework and why we are involved in partnership with RSPB and Forestry Commission Scotland in an exciting new project to restore White-tailed Eagles to Scotland's east coast. This, combined with a thriving west coast population, should help secure White-tailed Eagles once again as an iconic part of Scotland's natural heritage."

Moira Baptie, environment manager for Forestry Commission Scotland, said: "We are delighted to play our part in restoring this iconic bird to its former range in Scotland, working in partnership with RSPB, SNH and others, as part of our wider commitment to sustainable management of the national forest estate."