An impressive 2,000 Saker chicks have hatched in 2013 as a result of an artificial nesting programme in Mongolia. The project, which is run in partnership by the Environment Agency — Abu Dhabi (EAD) and Mongolia's Ministry of Nature, Environment and Tourism, was launched in 2010 with the aim of increasing the wild Saker population.

In 2010, EAD — on behalf of the United Arab Emirates government — signed an agreement with the government of Mongolia to build 5,000 artificial nests in the Mongolian steppes to encourage breeding among the species and increase the world's population of Sakers. EAD reported that 3,700 chicks have been born since the project was first launched. 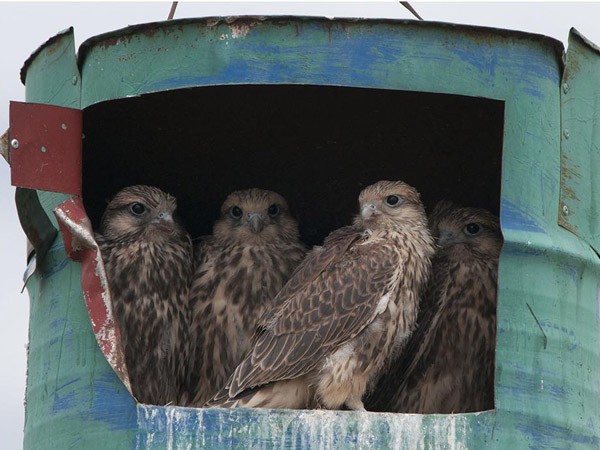 Several of the artificial nests have been fitted with cameras that record continuously, allowing officials to record the falcons' eating habits and predator threats. This year, the project has also been extended to address the problem of Sakers being electrocuted by power lines — a major cause of falcon mortality in Mongolia and China, which kills one falcon each week. Officials took a number of steps to address this issue, including adding insulation covers to the power lines.

This project has been instigated partly in response to the last 20 years when the United Arab Emirates has been the main destination for thousands of falcons caught and sold illegally for hefty sums on the black market. Kazakhstan is estimated to lose up to 1,000 Sakers per year to Middle Eastern falconers.

H.E Razan Khalifa Al Mubarak, Secretary General of EAD, commented on the project's progress: "This initiative was introduced to promote sustainable breeding practices and to provide birds with safe and secure breeding environments in a bid to boost global population numbers. I am happy to report that, in addition to the success we have seen with the breeding, we have also built up the capabilities of local biologists and have incorporated an educational programme in schools in Mongolia as well as two schools in Abu Dhabi, in partnership with the Abu Dhabi Education Council."

More information can be found on the Middle East Falcon Research Group website.