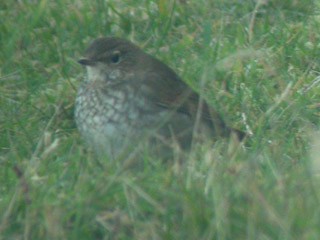 When it was trapped mid-afternoon it was aged as a first-winter due to having two moulted greater coverts and pointed rather than rounded tail feathers. As with the Chestnut-eared Bunting, it showed absolutely no signs of captivity. It was in immaculate feather condition and with no claw or bill damage. It was feeding furiously and had good fat levels when examined.