"It's fantastic that people visit protected areas so often, and are getting so much from experiencing wild nature — it's clearly important to people and we should celebrate that," said the leader of the study, Andrew Balmford from Cambridge University.

Even with these impressive numbers, the researchers caution that they are likely to be underestimates. To come up with their figures, the researchers used visitor data from 550 protected areas around the world and then extrapolated that to the world's total 140,000 parks and nature reserves, basing visitor numbers on each one's size, remoteness, and national economy.

Balmford admitted that the model was limited, but said it was "the best there is at the moment." The team also excluded marine protected areas, Antarctica, very small reserves, and Category I Protected Areas, which are generally off limits to most types of tourism.

The scientists calculated that visits were highest in North America, where there were approximately three billion visits a year, and lowest in Africa, which had around 100,000. All told, visits in North America and Europe accounted for about 80 per cent of total visits. 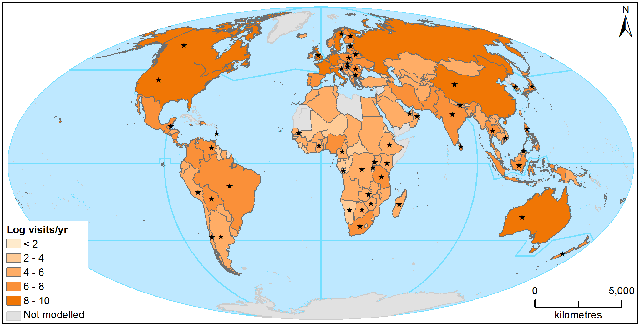 The researchers say their findings prove that governments are spending far less on protected areas than they should. "Our US$600 billion figure for the annual value of protected area tourism is likely to be an underestimate, yet it dwarfs the less than US$10 billion spent annually on safeguarding and managing these areas," said Robin Naidoo of the World Wildlife Fund, who also took part in the study. "Through previous research, we know that the existing reserve network probably needs three to four times what is current being spent on it." Indeed, recent research has found that 50–80 per cent of the world's protected areas (including marine protected areas) were underfunded or poorly managed.

Of course, the world's protected areas also provide much more than just tourism money. They also conserve embattled biodiversity, store tremendous amounts of carbon, safeguard freshwater sources, and, according to research, provide unquestionable psychiatric, spiritual, and cultural benefits. "Yet many [protected areas] are being degraded through encroachment and illegal harvesting, and some are being lost altogether. It's time that governments invested properly in protected areas," noted Balmford.

In recent years, many protected areas have also been abolished, downsized, or downgraded, often in an effort to exploit them for natural resources, such as logging, mining, agriculture, or oil and gas. Some countries have even begun to take a hostile view towards protected areas. For example, Australia's government has pledged to create no new national parks and attempted (though failed) to strip an area from a UNESCO World Heritage Site for logging. Meanwhile, the US House has passed legislation that would hamper a President's ability to establish new protected areas, though it's unlikely Obama would sign.

"Stopping the unfolding extinction crisis is not unaffordable," said Balmford. "Three months of Apple profits could go a long way to securing the future of nature. Humanity doesn't need electronic communication to survive, but we do need the rest of the planet." Apple made $18 billion in the last quarter of 2014, the biggest ever by a public company.