Researchers have found that providing extra food in early spring leads to earlier egg laying and increased productivity in Great Spotted Woodpeckers. Birdwatchers have been amazed by the big increase in the numbers for Great Spotted Woodpeckers over the last 15 or so years. In a paper in the latest issue of Bird Study, the journal of the British Trust for Ornithology, authors Ken and Linda Smith provide a potential explanation for the woodpeckers' success.

In a wood in Hertfordshire, Great Spotted Woodpeckers were provided with suet blocks at 13 feeding stations distributed over half of a 100-ha study wood from early February until late April 2011, with the other half of the wood left unfed. In the spring of 2011 breeding attempts in the 'fed' zone were earlier, by an average of four or five days and birds there produced almost twice as many fledged youngsters as those in the unfed zone, even though the supplementary feeding stopped before the main period of chick rearing. 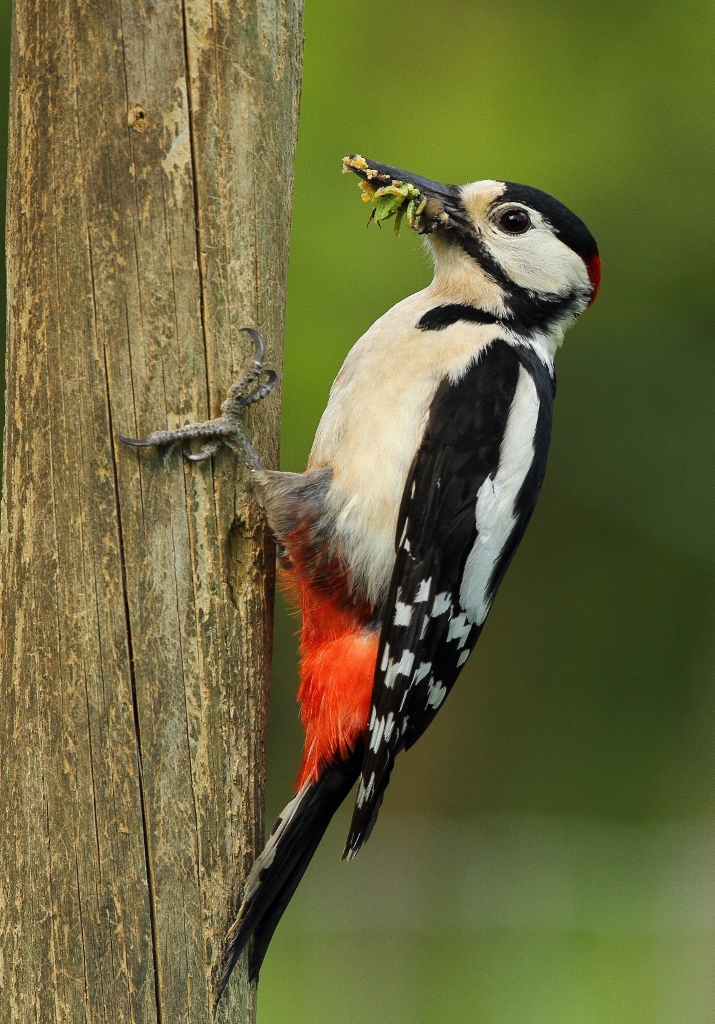 BTO members Ken and Linda Smith had been studying the woodland for the previous five years and found no differences between the zones in any of the previous years when no extra food was provided. The availability of caterpillars, the natural food for the breeding woodpeckers, was measured by using 'frass' traps to collect their droppings. 2011 was a very warm spring and the abundance of natural prey peaked very early. This meant that none of the woodpeckers' breeding attempts were well synchronized with the emergence of the caterpillars. However, the small advancement in first egg date meant the supplemented birds were better synchronized than the birds that did not have access to suet blocks. Birds in the fed areas raised an average of 4.2 chicks per pair, compared to 2.1 chicks per pair in the unfed areas. Ken Smith said, "Having studied these birds for best part of 30 years, I was amazed at the difference extra food made in 2011. A few days' shift in egg-laying date allowed them to be so much more productive."

The response of Great Spotted Woodpeckers to supplementary feeding suggests that they may be limited in their ability to shift their breeding period in response to the earlier boom in caterpillar numbers. This has important implications for the response of the birds to warm springs, which are expected to be more frequent under future climate change. By using feeders, Great Spotted Woodpeckers breeding in woodlands close to gardens may well be able to avoid problems caused by the changing timing of the spring season. By producing a big brood of youngsters, even in early springs, garden-feeding parents may be helping to fuel the current population increase.