It is a question people have pondered for centuries: how do migrating birds navigate between breeding and wintering grounds? Do they have some genetic GPS to steer them along time-honoured routes, or do they learn the way from parents or elders in migrating flocks? New research shows that, in the case of the endangered Whooping Crane of North America, the birds do learn routes from older and more experienced companions — and all of them become better at navigating with age and experience.

University of Maryland ecologist Thomas Mueller and colleagues took advantage of eight years of detailed migration data compiled on birds bred in captivity and released in Wisconsin's Necedah National Wildlife Refuge for a journey to their Florida breeding grounds. Flying groups that include a migration-savvy seven-year-old crane veer off course 38% less often than groups in which the oldest birds are only a year old, according to an eight-year study of Whooping Crane migration between Wisconsin and Florida. On average, the one-year-olds that don't follow older birds veer off the flight path by 60 miles (97km). But the cranes' migration ability improves steadily with age, the study shows. Groups with even one of these older birds deviate less than 40 miles (64km), on average, from the most efficient route. 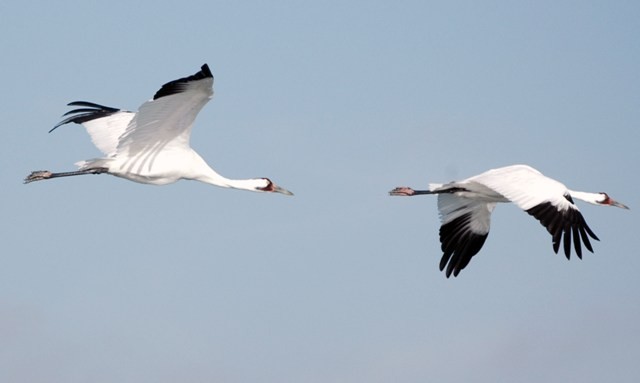 Other likely variables for navigation success, including gender and the size of flying groups, appeared to make no difference in the results. Mueller, a co-author of the study, and his team theorized that the older birds recognize landmarks better and may also know how best to cope with bad weather — two skills they apparently pass on to the young birds that follow their lead. "As the oldest bird in the flying group gets older, it seems that there's dramatic improvement in its migratory efficiency for about the first five years," Mueller said. "There is a very big difference if the oldest bird in a flying group is one or two years old or if it's five or six or seven years old. A bird can be pretty young and still have great success," he added, "as long as it flies with a bird that is pretty old."

Previous studies have suggested that learning plays some role among migrating species. However, as Mueller cited, what is new here is that learning takes place over a number of years and the older birds are crucial to the development of the younger birds. Mueller explained: "That was difficult to look at before because the data simply didn't exist. Usually tracking data on animals lasts for a year or two years if you're lucky."

As part of unprecedented efforts to save and reintroduce the species, scientists collected data to gauge the success of breeding, training, and the birds' subsequent 1,300-mile (2,100km) migration. Individual birds were identified and tracked with satellite transmitters, radiotelemetry, and human observers. "Usually you don't even know if a bird is two or three or four years old," Mueller continued. "There are lots of [previous] comparisons between juveniles and adults, but here we had the full progression of many years as well as the information of how old the birds were, how they were related to one another, and exactly where and when they migrated."

What does this mean?

The Whooping Crane research is important new evidence showing how bird migration is, at least in part, a learned skill. But it won't put to rest the long-running debate on the respective roles played by genetics and social learning.

In fact, Mueller said, the study suggests an interesting combination of genetics and learned behaviour at work. It begins when the time comes for the cranes' first autumn flight to their southern wintering grounds and the captive-bred animals are actually guided by humans who fly ultralight aircraft all the way to Florida. "If you think about even that initial migration, it needs to be at least somewhat learned," he explained. "They may have a natural tendency to migrate in the fall, but we don't think many would get anywhere where they could survive without some training." 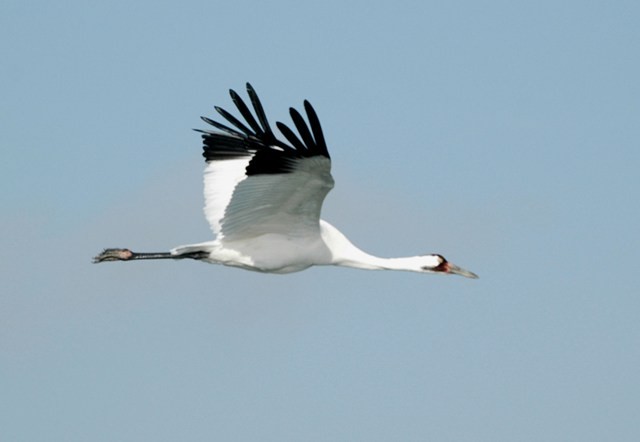 But genetics do begin to play a more easily visible role on the return trip, he added. "Then after they've been shown the route once, in the spring they know it's time to initiate a return and there's a genetic component in play there. Because nobody has showed them this, so it's genetics combined with the learned knowledge from the trip south in the fall."

"We can imagine that the low breeding success that we are currently struggling with in this reintroduced population might actually improve over time, with increased experience and learning of appropriate breeding behaviours. For example, maybe chicks learn from their parents how to themselves be successful parents. Overall, these results suggest that patience may well be important if we hope to restore migratory Whooping Cranes to eastern North America."