Wintering Ovenbird in the Midlands! 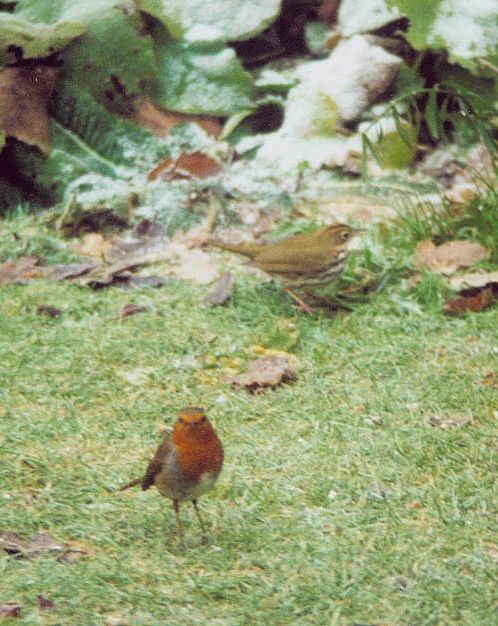 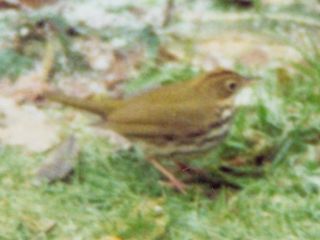 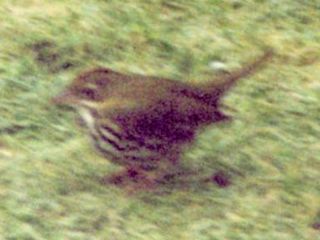 More photos of this bird

[STOP PRESS 13th Feb: It has recently come to light that the bird was in the village of Dymock, Gloucestershire (SO6931).]

Just the single word 'Ovenbird' can send shivers down the spine of many British birders. It is an extreme rarity within our shores, with all four European records coming from Britain and Ireland. Only two have been found alive, and neither of the live representatives of this delightful species were accessible for massive numbers of observers to see. The last was present from 24th-25th September 1990 on Dursey Island (County Cork) and this species is high on the wanted list of many birders.

Although North America's wood warblers are generally very brightly coloured, the Ovenbird Seiurus aurocapillus is one of the more subtly coloured members of the tribe, but one that is amongst many birder's favourites. For birders returning from American trips, Black-and-white Warbler Mniotilta varia, Worm-eating Warbler Helmitheros vermivorus and the waterthrushes are prime candidates for 'bird of the trip' for many. Ovenbirds are most closely related to the waterthrushes. Their name actually comes from the dome-shaped nest, created with leaf-litter, which is said to resemble a Dutch oven.

News that one had been present for part of the winter broke on 23rd January, when it was revealed that the RSPB had received photographs (reproduced above) of an Ovenbird that had been visiting a private garden in the Midlands from about 20th December 2001 to 16th January 2002. The householder had asked the RSPB to identify the bird, which they promptly did, though when contacted she reported that there had been no further sign of the bird. She had apparently also sent the photographs to the local County Recorder.

Had the bird still been present when the householder was contacted, access possibilities could have been investigated, but unfortunately this now appears to be irrelevant. There is always the possibility that such reports can be an elaborate hoax, but the time taken to investigate such a possibility is too long for many and the heart quickens in the hope that it may eventually reappear. As with all rarities, this record will be subject to assessment by the relevant committees.

Putting this aside, it is interesting to look at previous records. The first was found by Iain Robertson whilst he was searching for migrants on Out Skerries (Shetland) during the afternoon of 7th October 1973. This would be more in keeping with the way that American passerines are usually discovered in Britain and Ireland. The bird ran underneath a mist-net erected to trap it beside a dry stone wall, but eventually it was caught and later released into a nearby cabbage patch, after Robertson had aged it as a first-winter and shown it to his wife. It was seen by a few birdwatchers the next day, but then disappeared until the crew of MB Heather Bell noticed what was almost certainly the same bird in the fish baskets on board as they left the island on 12th October. It then left the boat as they passed Fetlar. Dead birds were found in County Mayo in December 1977 and in a Devon garden in October 1985.

So what of this bird on its home turf? As with most regular American passerines that turn up in Europe, Ovenbirds breed along the eastern side of North America, well beyond the Great Lakes, but not quite reaching Hudson Bay. They do, however, breed in Newfoundland, from where many of our Nearctic passerines are thought to originate. They migrate south to winter mainly in Florida and the West Indies, and from Mexico south to Panama. This distribution is mirrored by Northern Waterthrush Seiurus noveboracensis, although part of this species' population breeds further north than Ovenbirds and they also winter further south, into northern South America. The shorter migration of the Ovenbird explains why it is less likely to reach Europe compared with the Northern Waterthrush. Both species are considered to be declining across their range.

Ovenbirds feed on the ground, searching for food, chiefly insects and spiders, among leaf-litter in thick scrub and forests. They bob their heads and flick their tails in a manner recalling a pipit or wagtail, but appear less nervous. Often they undertake a regular circuit of a small area, running away at the approach of danger, only to return when things are quiet again. Overseas we have seen several Ovenbirds very well by waiting near the first 'point of discovery', to which they soon returned once they felt comfortable with our presence. One was also seen to feed below a bird table in Florida, sifting through seeds and fruit scattered by Painted Buntings Passerina ciris and cardinals.

On the face of it, the record of a New World wood warbler in an English garden during the middle of winter might seem exceptional, especially following a very poor autumn for representatives of the family on this side of the Atlantic. Most of us tend to associate rare American passerines with southwest England or southern Ireland. However, a delve into our recently published CD-ROM Guide to Rarer British Birds (BirdGuides Ltd) reveals that this is not the first American wood warbler to take up a temporary winter residence in an unlikely setting, nor we suspect will it be the last! The first of 24 British Yellow-rumped Warblers Dendroica coronata was found in a garden at Newton St. Cyres near Exeter (Devon) on 4th January 1955, remaining until it was found dead on 10th February. Two of 15 British Black-and-white Warblers Mniotilta varia have occurred in Norfolk during the winter months: the first was the famous bird at Hoe Hill, Ludham, from 3rd-15th December 1985, followed by one at Whitlingham Lane, Norwich, from 9th-15th November 1996. The most famous twitch of all time involved the first, and only, Western Palearctic record of Golden-winged Warbler Vermivora chrysoptera. A male was found in gardens around Larkfield, Maidstone (Kent) on 24th January 1989 and remained to 10th April 1989. Amazingly, the 4th British Common Yellowthroat Geothlypis trichas was found near Sittingbourne (Kent) from 6th January to 23rd April of the same year. Many of us with longer memories will recall the 4th British American Redstart Setophaga ruticilla at Gibraltar Point (Lincolnshire) from 7th November to 5th December 1982. More recently, a Blackpoll Warbler Dendroica striata was present at Bewl Water (East Sussex) from 10th-20th December 1994. In addition, many other American passerines have been detected in suburban settings during the winter months so perhaps bird tables, or your local park, offer better than expected odds of finding a wintering vagrant at this time of year rather than coastal headlands.

As this mouth-watering list of rarities illustrates, it is clear that suburban gardens can turn up stunning vagrants – how many more pass undetected? The lady who had this amazing visitor is an RSPB member and intends, as in previous years, to take part in this weekend's Big Garden Birdwatch - is there another stunning rarity waiting to hit the headlines?