Wintering Blackcaps – Where Do They Come From and Why? 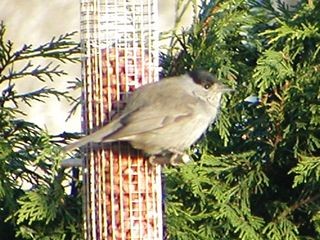 I was discussing this article with a friend and he remarked "You know, I can still remember how excited I was when I first came across a pair of wintering Blackcaps in Norfolk during 1985". Not that long ago, but these warblers have now become a familiar sight in many of our gardens during the winter months, with a wintering population that perhaps exceeds 10,000 individuals. In fact, winter records of Blackcaps in the UK are not that new and stretch back as far as the 19th century. What has changed, particularly over the last 30 years or so, is the sheer numbers of birds that now choose to spend the winter here, rather than their usual wintering areas in southern Iberia and North Africa. This provokes the questions, where do they come from and why do they now prefer Weston-super-Mare to the Costa del Sol?

Well, a clue to the first question came as early as December 1961, when a Dublin cat caught a Blackcap that had been ringed in Austria the previous summer. Despite this and other ring recoveries, the breeding origins of these UK wintering birds was still disputed: some people believed these individuals were UK breeders that had failed to migrate; others thought that they might be of Scandinavian origin. However in the early 1990s a research group in Germany finally laid the problem to rest. In a rather elegant experiment, Professor Peter Berthold and his colleagues captured 40 Blackcaps near Weston-super-Mare during the winters of 1988-1990 (the Somerset coast is still one of the best sites for wintering Blackcaps in UK). Peter took these birds to his research station in southern Germany and held them until the following autumn, when the birds began to show migratory restlessness (the birds hop in the direction they want to migrate). He found that, in contrast to most of the Blackcaps breeding in southern Germany (which migrate in a southwesterly direction towards Iberia and North Africa), the British birds orientated in the direction of the UK (northwest), meaning that the breeding origins of the UK wintering population were most likely to be in south central Europe. Subsequent ringing recoveries have helped confirm this. The research group went on to discover that the young of these individuals migrated in the same direction and thus the migratory change had a genetic basis, the first time such a phenomenon had been found in a vertebrate.

So, if odd birds have been spending the winter here for over a hundred years (at the very least - and most likely much longer than this), why is it only now that we are seeing this population increase? There seems to be a combination of factors responsible. For a start winters are much milder now than they were 50 or 60 years ago, potentially making it easier for birds to survive. Secondly, and more importantly, since the end of the Second World War we have been creating a winter feast for Blackcaps by planting berry bushes in our parks and gardens and keeping our bird tables well stocked. Bird tables are probably most important in the late winter when the berry crops become exhausted.

But the rate of increase can't be explained by better wintering conditions alone. It seems that by wintering in the UK our Blackcaps gain an advantage over their counterparts that winter in southern Europe and north Africa and Peter Berthold's research group have ideas about this as well. The main thing that triggers the urge to migrate and the development of breeding condition in Blackcaps is day length. In the UK the critical day length is reached around 14 days earlier than it is in the more southerly wintering areas. Therefore UK Blackcaps probably arrive on the breeding grounds (in breeding condition) earlier, and so should be able to claim the best territories and start breeding before the other birds arrive. In addition, because the distance between the UK and central Europe is much shorter than the distance between southern Iberia and central Europe, it is likely that our Blackcaps make energetic savings during migration and so have more to devote to breeding, thereby further increasing their chances of success. What this should mean is that UK Blackcaps will tend to raise more young than birds wintering elsewhere - and because the migratory trait is inherited, their offspring will also then winter in the UK, and survive better, produce more young and so on - until we reach the point today when Blackcaps have become a relatively common, but always welcome, sight at our winter bird tables.

The problem is that most of these ideas about why so many Blackcaps winter have never been fully tested. This is because until recently the only way of discriminating between birds from the two wintering populations on their central European breeding grounds has been by ringing recoveries. As you can probably imagine, even when very large numbers of birds are ringed during winter, the chances of coming across one of these individuals on the breeding grounds is extremely small. However there is hope, as these birds carry a record of where they have been within the stable isotope ratios of their feathers and toenails - which is where I come in.

Many elements exist in different forms with slightly different masses, and these are called isotopes. Some of these isotopes are radioactive and decay over time; others are stable - and these are the ones that I am interested in. Although the isotopes themselves are stable, the ratios of heavy to light isotopes change geographically as a consequence of biological and environmental processes. For example, plants in arid areas have different biochemistry to plants in wet areas and as a result have different carbon isotope ratios. 'We are what we eat', thus isotopic differences at the bottom of the foodchain, such as those in plants, are transferred up the foodchain (through diet) and reflected in higher animals.

Another element with isotope ratios that vary geographically is hydrogen. In this case the stable isotope ratios change with latitude. As a consequence of these processes, animals and plants in Iberia have different stable isotope signatures to animals and plants in the UK. By sampling tissues that I know were grown before the Blackcaps migrated (e.g. feathers or toenail clippings), I can separate individuals from the two wintering populations (on the breeding grounds) based on their stable isotope ratios. Therefore we can now, for the first time, actually test those ideas about why the change occurred. We can assess whether birds do mate with individuals from the same wintering area by asking the question: do partners have similar stable isotope ratios? We can look at whether birds with isotope ratios indicating UK origins arrive earlier on the breeding grounds and raise more young than birds with ratios indicating southern European origins. Finally, we can also use this technique to assess the importance of bird tables to Blackcaps during the British winter.

So if you do see any Blackcaps in your garden and if you find any dead individuals, which would be extremely valuable for this study, then please contact me at sbearhop@bio.gla.ac.uk or call on 0141 300 4434. Dead blackcaps should be placed in a polythene bag and then stored frozen; I will arrange for the bird to be picked up or cover the costs of post. Further information can be found at http://www.gla.ac.uk/ibls/DEEB/sb/index.html