In striking contrast to last week's report on the relation between feeding and the reproductive success of Great Spotted Woodpeckers, new research1 claims that feeding wild birds during the winter could harm the success of any chicks born in the following spring. Scientists carried out the study on nine sites across Cornwall, where over three years they supplemented the Blue Tit population's winter food with nothing, balls of fat, or fat enriched with vitamin E. Nest boxes at the sites were then checked the following spring to assess how the number of eggs, and the size and success of any chicks, related to the amount and type of extra food provided. 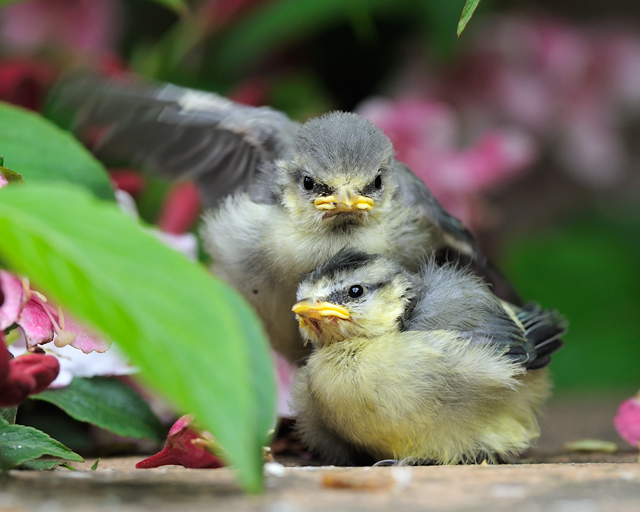 The study, published in Scientific Reports, found that when extra food was given Blue Tits produced smaller chicks, which had a lower chance of survival than the chicks that didn't receive any additional food. Dr Jon Blount of the University of Exeter, who led the research team, explained that, "Although the precise reasons why fed populations subsequently have reduced reproductive success are unclear, it would be valuable to assess whether birds would benefit from being fed all year round rather than only in winter".

Supplementing birds' sparse winter diet with commercially available food is common in the UK and USA, with more than half a million tonnes of commercial bird feed sold each year in the two countries. Vitamin E was used in the study for one test group as it is often found in bird food such as seeds and nuts. Previous studies have shown that giving wild birds additional food can have an almost immediate benefit to their survival, and can enhance future breeding success. Dr Kate Plummer of the British Trust for Ornithology, who is first author of the research, says that a possible reason for the findings is that extra food helps birds who would not otherwise have survived to breed. The poor condition of these birds means they can only raise a small number of chicks.

The paper's abstract is as follows:

"Supplementation of food to wild birds occurs on an enormous scale worldwide, and is often cited as an exemplar of beneficial human–wildlife interaction. Recently it has been speculated that winter feeding could have negative consequences for future reproduction, for example by enabling low-quality individuals to recruit into breeding populations. However, evidence that winter feeding has deleterious impacts on reproductive success is lacking. Here, in a landscape-scale study of blue tits (Cyanistes caeruleus) across multiple years, we show that winter food supplementation reduced breeding performance the following spring. Compared to unfed populations, winter-fed birds produced offspring that weighed less, were smaller, and had lower survival. This impairment was observed in parents that had received fat only, or in combination with vitamin E, suggesting some generality in the mechanism by which supplementary feeding affected reproduction. Our results highlight the potential for deleterious population-level consequences of winter food supplementation on wild birds."