One of the most notable events of this winter has been the influx of Iceland Gulls. Individuals have been seen at a host of sites across the country, many where the species is ordinarily either unknown or very rare. In most winters, Iceland Gull is a scarce visitor to sites in the north and west of the British Isles; this winter has seen the most popular Iceland Gull haunts, which usually attract a handful of birds, play host to double-figure counts. Stornoway harbour (Outer Hebrides), for example, held 88 Iceland Gulls on 9th March, while Killybegs (Donegal) had up to 45. With the Iceland Gulls have come record numbers of the Canadian-breeding Kumlien's Gull, identified by the variable dark markings on their primary feathers. 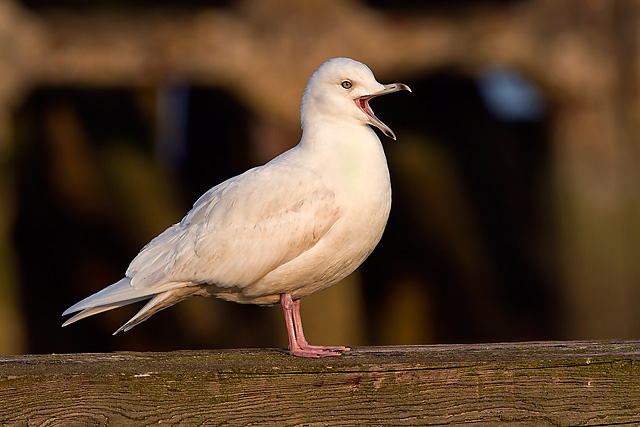 During the autumn and first half of the winter, numbers of Iceland Gulls were high but not exceptionally so. Then, presumably driven to our shores by stormy weather in the North Atlantic, numbers began to soar through late December and early January. The number of records submitted to BirdTrack (including those from BirdGuides) clearly shows this trend. 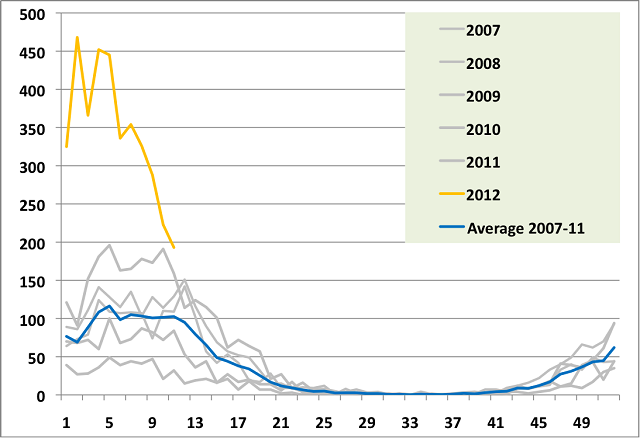 As spring approaches, many of our wintering Iceland Gulls will begin to wander as they make their way back north. March can be a great time for finding one in the most unexpected of places. It is also interesting to know where Iceland Gulls aren't being seen, something revealed by the BirdTrack map of sightings in 2012, below. The map shows the distribution of Iceland Gull in relation to 10-km squares for which records of any species have been submitted: yellow signifies that the square has been visited with no sightings of Iceland Gull, orange represents between one and 25 sightings, and red shows more than 25 sightings.

Over the next few weeks the vast majority of these wandering winter visitors will depart, and tracking the timing of such movements is where BirdTrack complete lists come into play. By entering in all the species you've identified while out birding — yes, even the Woodpigeons and Wrens! — it is possible to calculate the proportion of lists that contain Iceland Gulls (or any other species, for that matter). The exact pattern of the falling reporting rate of a departing migrant gives a strong indication of the precise timing of departure, and whether a particular species generally leaves en masse or more steadily over a longer period of time. The reporting rates for common winter visitors such as Redwing (below) are particularly good at revealing such patterns. Similarly, BirdTrack complete lists are extremely valuable for helping to monitor the pattern of arrival of summer migrants, and to understand any changes that are occurring in response to climatic change and/or other factors.

Sightings of Iceland Gulls can be uploaded to the BirdGuides sightings page but if you have a full list of species from a site you have visited (with or without Iceland Gull), please enter it online at www.birdtrack.net.

This winter has also seen slightly better than average numbers of the other familiar white-winged gull, the Glaucous Gull. Telling the two species apart can be tricky at times, but the identification video below — put together by BTO and using footage from BirdGuides' British Birds Video Guide — gives helpful advice on what to look for if you're lucky enough to encounter one of these gulls this spring.