White Pelican in the UK 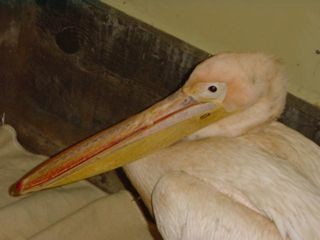 Following the records of at least one White Pelican (Pelecanus onocrotalus) that toured England in 2001, an article appeared in The Yorkshire Post on Friday 28th December which may help the species' credentials in Britain. Entitled "Cable-accident pelican baffles bird experts", the article stated that "the adult bird was found near Shipman, Norfolk yesterday after it flew into electric cables and has been taken to an RSPCA hospital".

Officers did not know if bird would survive its injuries and were mystified about how the bird came to be in Norfolk. It was not a known escape and had not been reported missing by any Wildlife Park or private collector. It had also evaded the eyes of birdwatchers since 20th December when it was at Mepal Gravel Pits, Cambridgeshire. It had toured England since its first sighting at Slimbridge on 19th October, visiting Worcestershire, the Dearne Valley in South Yorkshire, and many Norfolk sites. Earlier in 2001, an immature bird first reported at Tringford Reservoir, Hertfordshire, was presumably the bird later picked up on an oil rig near Holland in late May.

Ian Robinson, the veterinary manager at RSPCA Norfolk's Wildlife Hospital, said the bird was an "Eastern" White Pelican and had been spotted yesterday by a dog-walker who saw it lying injured in a farm entrance and called the RSPCA. It was taken to the wildlife hospital and treated for injuries to its legs and one wing, but officers do not yet know if the cables electrocuted it. If it was, then it could have potentially fatal internal injuries, but vets are hoping it escaped deep tissue burns and could recover. If they cannot discover where the bird came from then it will be re-homed.

The current official BOU status of White Pelican, and indeed all other Pelican species that have occurred here (Dalmatian Pelican P. crispus and Pink-backed Pelican P. rufescens), is that they are most probably escapes. As such, they have no place on the British List. Several have been proven to escape with at least 24 records in the last millennium.

Breydon Water has accounted for about 50% of the British records of White Pelican with the first credible record of this species in Britain reported there on 21st July 1906 (see Palmer: First for Britain, 2000). During a warm spell, a White Pelican flew in from the sea and landed on mudflats at Breydon Water, heading east the following morning, at 9.30am. Later in the month, what was almost certainly the same bird was found at Seasalter Marsh, near Whitstable, Kent, where it remained until the end of October.

An early reference to pelicans in Britain concerns a humerus bone found in peat at Feltwell Fen, Norfolk, and some old bones also found in the peat at Burnt Fen, Littleport, Cambridgeshire. Further bones were considered more likely to have been Dalmatian Pelican: In c.200 BC the inhabitants of Iron-Age Glastonbury left pelican bones following a meal and it is possible that the birds were caught locally in the Somerset Levels. Some were from a young bird, too young to have fledged.

A pelican shot at Horsey, Norfolk, on 22nd May 1663, was held in the collection of Sir Thomas Browne. As the species was rare in Britain, Browne concluded that it was one of the King's pelicans that had escaped from St James's Park, London. They were reportedly kept there from 1660-70 and they have carried the escape caveat since.

As the latest bird is now in captivity, it may now be examined to see if it has any scars indicative of being in captivity or is carrying any parasites from abroad (Africa would be nice). As the bird has been in Britain for so long, these are now only likely to be internal. This could prove the provenance of such a bird and if anyone were in a position to visit the RSPCA centre, would they ask the vet to do so. BirdGuides would be grateful to hear of the outcome of any such investigation.

Phil Palmer’s book First for Britain and Ireland 1600–1999 provides a history of bird recording in Britain as well as presenting accounts of the first records of over 360 species on the British List. It also includes c.200 photographs. To order a signed copy email phil@nightjar.connectfree.co.uk - price £23 plus postage.