Whiskered Auklets prove to be 'homebirds' 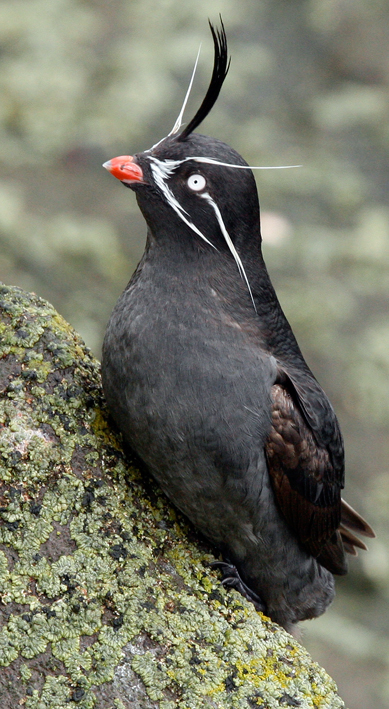 A new study presents some of the best evidence that Whiskered Auklets are an outlier in their family by not migrating and instead staying close to their breeding colonies throughout the year.

Most migratory birds lead two opposing lifestyles in the same year. During the breeding season, a bird's location is constrained and its habits repetitive, given a nest full of chicks that require food, warmth and protection. For some species, it is the only time they congregate or otherwise come together.

However, during the non-breeding season, their default task is to survive. Whether migratory or sedentary, as long as the bird makes it back to the breeding sites to reproduce, it can travel almost anywhere it wants. But, unlike many other seabirds, Whiskered Auklets don't wander far at all.

Carley Schacter and Ian Jones of Memorial University of Newfoundland, Canada, used light-based archival geolocation tags on Whiskered Auklets breeding on Buldir Island, Aleutian Islands, Alaska, to determine the locations of their full annual life-cycle. The data they collected corroborated what researchers have long suspected: the species is unique in its family in not migrating at all.

Most seabirds roost on the water at night, but Whiskered Auklets stay in the vicinity of the breeding colony year-round and consistently return to roost on land at night.

Such behaviour may not be unique to auklets, but to all seabirds. How could this unusual adaptation have come about? Whiskered Auklets capitalise on foraging habitat close to their breeding colony, which reduces metabolic costs. Given the influence of trade-offs on animal behaviour and life-history strategies, use of this foraging area could be a large driver for their residential behaviour.

But there are risks to this strategy as well. Lead author Carley Schacter explained: "While this non-migratory behaviour is very interesting to us on a theoretical level, there are also important implications for the conservation and management of this most vulnerable auklet species. Year-round residence near the breeding site (an area of high fishing by humans and shipping traffic) makes Aleutian-breeding Whiskered Auklets even more exposed than previously thought to [anthropogenic] threats such as oil [or] fuel spills, and light attraction leading to fatal collisions with vessels. Their nocturnal roosting behavior also makes them especially vulnerable to introduced mammalian predators such as rats and Foxes."

"The authors found evidence for an almost unique adaptation of a seabird in a remote, difficult-to-work-in and isolated environment," added Jeff Williams, Assistant Refuge Manager at the Alaska Maritime National Wildlife Refuge, who was not involved with this research. "We now know that Whiskered Auklets are particularly sensitive to human-caused disturbances and can incorporate this information into management planning."