Whimbrel - The May Bird 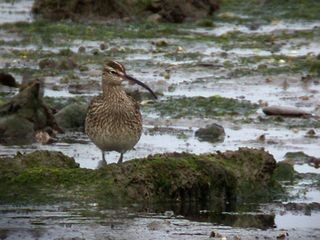 As sightings on Bird News Extra indicate, the annual northward migration of Whimbrel is now well underway. Although it appears that first-year birds remain at the wintering grounds in West Africa, the bulk of the European population, which is estimated to be between 600,000 and 700,000 breeding birds, are now over halfway to the principal breeding grounds in Iceland, Scandinavia and Russia. Only a small proportion of this total pass through the UK, though between 450 and 500 pairs remain to breed in the Shetlands.

UK ringing recovery data for Whimbrel caught whilst on the spring migration is sparse. In the Migration Atlas, details are given of 3 birds, 2 of which continued to Russia from southeast England whilst the other reached Finland from South Wales. Some of the birds move rapidly through the UK, as indicated by a colour-ringed bird which was sighted at Dawlish Warren in early May and recorded in Shetland 4 days later. However, many birds use damp pastures as staging sites to refuel and in some areas nearby roosts develop, with birds probably staying in the locality for a few days. Such feeding and roosting is not a usual feature of the reverse migration in autumn.

In the Dutch province of Drenthe over 10,000 birds were recorded at traditional roosts in the late 1970s. The surrounding grasslands provided a rich source of earthworms and leatherjackets but as the local water table fell so did the numbers at roost and by 1995 only 550 birds were seen. The majority of birds switched to the surviving water meadows of Friesland. Similar events seem to have occurred in the UK. The Steart Island roost in Somerset, first noted in 1972, peaked at about 2000 birds in 1978 but numbers fell away when the water table of the nearby Levels dropped.

The total number of Whimbrel staging in the UK is not known. Unfortunately, the peak in Whimbrel numbers falls between the April and May mid-month dates of the Wetland Bird Survey. In WeBS results for 1999/2000 only 3 sites are reported to have had more than 50 birds present in May (16th). Also, it is likely that many of the birds which are reported elsewhere have already staged on the continent and, like the Dawlish bird, are moving steadily northwards and only stopping for short periods of rest and feeding.

Currently, the northwest of England seems to have one of the highest concentrations of roosting Whimbrel. Full details of four Lancashire roosts were given a year ago in a BirdGuides article written by Stephen Dunstan http://www.birdguides.com/birdnews/article.asp?a=80. The highest total quoted was the 847 birds present at Barnacre Reservoir on 2nd May 1998.

In Yorkshire, a roost at Wheldrake Ings, just southeast of York SE694444, is also well recorded and since the mid 1980s maximum daily totals in spring have exceeded 100 birds in most years. Whimbrel usually arrive at this roosting site in front of the Swantail Hide anytime between 90 minutes before, and 30 minutes after, sunset. Often one flock accounts for half the night's total but arrivals usually include many singletons and groups of two to six birds. On misty or windy evenings the final flight approach of the birds to the roost is low, silent and direct, with the birds landing at the edge of the pools to drink and preen. In this final approach the birds are normally silent. However, on calm clear nights the flight is much higher and terminates in 'wiffling' and much calling. During darkness there is often a good deal of activity and the birds leave the roost before dawn. The maximum count of the year usually falls on the 3rd of May, with numbers steadily decreasing thereafter.

The whereabouts of the daytime feeding grounds used by the birds roosting at Wheldrake Ings is presently unknown, despite much searching over the years. It is also unclear, as with most other roosts, how long individual birds stay at the staging site. In an attempt to solve some of these mysteries we are making detailed observations of the roost and surrounding areas this year. We would be very interested in receiving any information about other roosts - their locality, daily counts (with arrival times even better), associated feeding area and any indication of turnover.