The Hawfinch is a secretive species with which few of us can claim to be familiar. A striking bird, and a tricky species to see, this elusive finch can take quite a bit of effort to secure decent views of and they are high on the 'most wanted' list of many birders. 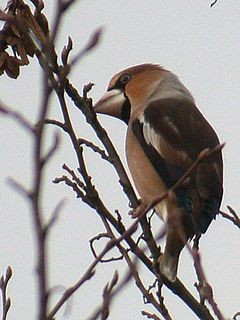 An uncommon resident in the UK, with a breeding population estimated to be between 3,000-6,500 pairs, it is scarce to the north and west of the preferred strongholds in the south of the country. A recent study of the status of the Hawfinch in the UK (Langston et al., 2002) found that Hawfinches have declined in many counties by between 2% and 27% over a recent 20-year period, and by 37-45% during a recent 10-year period. It is presently on the 'amber list' of Birds of Conservation Concern, though declines in former strongholds of the species have raised even further concerns. Indeed, many sites which reported good numbers as recently as the 1980s are now devoid of birds. However, against these depressing statistics are reports that there have been population increases in counties such as Gloucestershire, Gwent and Wiltshire, and in some counties in the Midlands.

The sites around the UK at which it is possible to see this declining species are becoming few and far between. Winter is the best time of the year to observe birds, when they form small flocks in the canopy and often congregate at regular roosting sites. The best way to see birds is pick them up in flight, when they utter a distinctive 'ticking' call, and then hope that they alight in the tops of some tall trees.

Use the Bird News Extra search page for up-to-date information, and to search for sightings in your area. Enter Hawfinch and the area you are interested in sightings for. In addition there are a number of 'traditional' sites from which there have been no recent reports – why not try and visit some of these and contribute to our knowledge regarding the current status of these fantastic birds?

During the winter 2002/2003 at least 207 birds have been reported from a number of sites, but the following locations have provided regular sightings: