Across the country, householders have been seeing Blackbirds with strange white markings. The condition, typically referred to as leucism, is one of a number of plumage abnormalities to have been reported through the BTO Abnormal Plumage Survey, preliminary results of which have just been published.

In less than a month, the survey has clocked up nearly 700 sightings, involving more than 35 different species. Three-quarters of records have been of leucistic birds and, of these, nearly half have been Blackbirds. Leucistic birds may be confused with albino individuals, but the latter have pink, instead of dark, eyes and only account for 12% of survey records to date. It is not yet clear why Blackbirds appear to be particularly affected. It could be that they are unusually susceptible to the condition. However, it may be simply that any light-coloured feathers show up particularly clearly on birds that are black (or, in the case of female Blackbirds, dark brown). Indeed, several other species with all-black, or mostly black, plumage have been spotted with white feathers fairly often, including Carrion Crow (49 records) and Jackdaw (40). 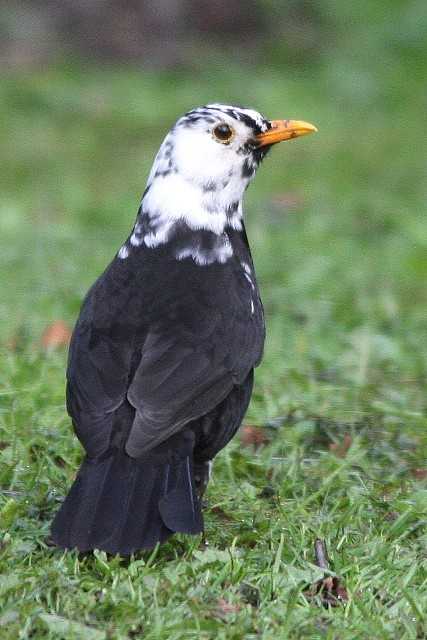 Many other strange-looking birds have also been seen. Of the 28 melanistic individuals recorded, those with an excess of dark-coloured feather pigmentation patterns, almost half have been Great Tits or Blue Tits, with their normally white cheeks and yellow bellies becoming dark coloured. Other fascinating abnormalities have included a family of four chocolate-brown Jackdaws in County Antrim, a Greenfinch with orange feathers in the West Midlands and a Goldfinch with an orange rather than a red face in East Sussex. Perhaps the most striking photo sent into the survey to date has been an all-white Starling, seen in Prestatyn, North Wales.

Dr Tim Harrison of the BTO Garden Ecology Team commented: "The diversity of species recorded through the survey is impressive, ranging from common garden birds, such as House Sparrow and Chaffinch, to less frequent visitors, such as an all-white Buzzard in Aberdeenshire and a leucistic Coot in Norfolk. On a handful of occasions, birds have looked so unusual that participants have simply had to write 'species unknown'." 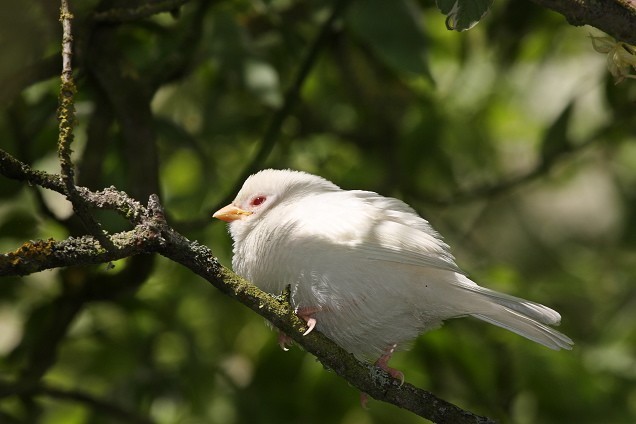 Dr Harrison added: "The most northerly survey record to date has been from Shetland, from where we received a report of a Blackbird with white feathers around its eyes, making it look as though it is wearing spectacles. The most southerly record has been a leucistic House Sparrow seen last year on St Mary's, Isles of Scilly. If you have ever seen a bird with unusual plumage in your garden, please let the BTO know." 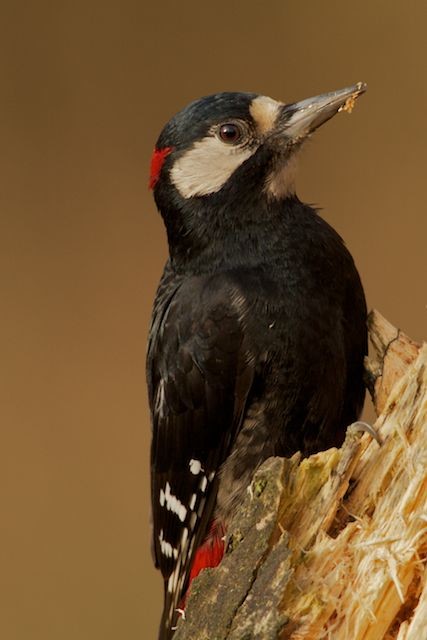 Survey forms can be completely online at the BTO's Abnormal Plumage Survey page.

You can also upload your photos to our galley by visiting www.birdguides.com/upload and we'll add them to our aberrant birds gallery, or email your images to the BTO at gbw@bto.org.