What is a Caspian Gull?

"What is a Caspian Gull?" is one of the more frequent questions coming in to BirdGuides. Back in 1982, when Peter Grant produced his seminal book Gulls: a Guide to Identification (revised edition 1986), which was really the starting point to modern gull identification, there was just the Herring Gull. There were Herring Gulls with pink legs and others with yellow legs, and that was about it. Of course Grant recognised that the southern forms were different subspecies, but he did not cover the more easterly birds in any detail. It was Ronald Klein who, before 1994, first discovered that some of the thousands of coloured and metal rings that he read on German landfill sites came from the Ukraine. He further noticed that these birds had a very distinctive appearance. Martin Garner was the first person to rumble these birds in the UK, not by reading rings, but by recognising them from their appearance. This he reported in his 1997 British Birds papers on "Identification of Yellow-legged Gulls in Britain". Of course when he wrote these papers, the name "Yellow-legged Gull" was ambiguous.

It was already well known that yellow-legged "Herring Gulls" from the Mediterranean moved north after the breeding season, but now birds from further east were doing the same - and they looked different. For a start, they didn't have yellow legs - but still they were all called Herring Gulls. To this day, field guides have not moved far beyond this position, and those that have do not give adequate treatment to these birds. Indeed the name "Caspian Gull" does not appear in any of them! To be fair, most of the progress in taxonomy and identification has happened after they were due at the printers.

Various names have been used for these birds, including Steppe Gull and Pontic Gull, but since Lars Jonsson's paper in Alula, Volume 4 3/98 "Yellow-legged Gulls and yellow-legged Herring Gulls in the Baltic" in which he presented reasoned arguments against the use of these names, the name Caspian Gull has gained widespread acceptance.

There is now increased clarity on the taxonomy of "large white-headed gulls" and it seems there are between 8 and 10 species knocking about between Europe and Asia. The clearest and most recent summary of all this is by Pierre Yesou, Dutch Birding Vol 24, No 5, 2002, "Systematics of Larus argentatus-cachinnans-fuscus complex revisited".

Most taxonomists seem finally to have agreed what mere birders have suspected for some time: that what was the Herring Gull in Europe is actually 3 good species, but at the time of writing, the BOURC has yet to agree, so the position of Caspian Gull and Yellow-legged Gull for the UK lister is still ambiguous.

The pink-legged gulls of Britain and other northern countries are still called Herring Gulls Larus argentatus, the yellow-legged ones from the Mediterranean, the Atlantic coast of Iberia, Morocco and the Atlantic Islands are called Yellow-legged Gulls Larus michahellis and the ones that have pale pink or pale straw-coloured legs, and which breed north of the Black Sea, in the Ukraine and east of there, are called Caspian Gulls Larus cachinnans.

More good news is that the majority of individuals of these three species are quite easy to identify at all ages (but some are tricky). Now "quite easy" is a relative term. One has to go through some pain and dedication before getting to this level of confidence.

The normal sequence that intending gull-watchers go through is to find one or two Yellow-legged or Caspian Gulls of their own. They then realise how "easy" it all seems to be, and so wonder what the fuss was about. They then get something horribly wrong in front of their peers, suffer embarrassment and humiliation (in their mind) and become somewhat disillusioned about the whole thing. This is a cyclical process, which proceeds by correctly identifying more and more gulls, interspersed with cock-ups. I have been there, got the tee-shirt, book and seen the film and I still get it wrong sometimes. The seasoned gull-watcher has a very healthy respect for the problem, but if you don't make public mistakes, then you are not trying hard enough!

So why is it so hard? It is because they are gulls and no matter what rules you try, some individuals will always break them. Large gulls are incredibly variable because of a number of factors including age differences, racial differences, moult timing differences, amount of exposure to sun, to name a few.

The seasoned gull-watcher also wonders today how it was that such a cracking and distinctive gull as Caspian Gull was overlooked for so long – both by taxonomists and by birdwatchers. This is because, regrettably, things that are taxonomically lumped are considered less interesting and so receive less attention than those that are split. Also, it is believed that, as in the case of Mediterranean Gull, these birds have only been coming north and west in more recent decades.

Finding and identifying a Caspian Gull

It is a disappointing day if, in southeast England, in winter at least, a day's gull-watching at a landfill or a reservoir roost does not produce a few Yellow-legged Gulls and at least one Caspian Gull. Caspian Gulls outnumber Glaucous and Iceland Gulls together in our neck of the woods.

The easiest ages to pick out are 1st-winters and adults. There are enough of these around to make it well worth looking for them. So these are the only two ages that we will deal with here. This is not intended to be a definitive identification guide, so we will only describe the most typical birds - but, being gulls, there is considerable variation.

Imagine trying to tell the difference between Yul Brynner and Telly Savalas from a written description – far better to see some pictures of these two follically challenged gents. So the first step is to get some idea of what you are looking for. Fortunately, there are enough websites around with a wide range of pictures of Caspian Gulls to give one an idea. A good place to start is Rudy Offereins' site, which has a comprehensive index to other gull sites, as well as an excellent collection of pictures of Caspian Gulls:

What is the first thing that hits you while scanning a large flock of gulls and shouts Caspian Gull at you? Usually, whatever the age, it is its face: a gleaming white head, a small beady eye, and a long (sometimes very long), snouty, slender bill. Any adult "herring gull" during October to November with a pure white head is worth a second look, and this can be a useful indicator into December too (this also applies to Yellow-legged Gull). By the turn of the year it is becoming less useful as Scandinavian Herring Gulls (argentatus), with a similar shape, become white-headed too.

What is the list of things that you should check out when you think you have found a likely candidate?

Just about all of these rules are broken by individual 1st-winter Caspian Gulls, but if you get a hit on most of them you are probably in with a shout.

Again, most of these rules can be broken in perfectly good adult Caspian Gulls.

Apart from its appearance, if you are ever fortunate enough to hear a Caspian Gull call, it is quite remarkable: more like a donkey than a Herring Gull! Whatever the age, its behaviour on landfills is often quite distinctive, being aggressive to other birds, while holding its long wings outstretched like an albatross. They seem to be hyperactive; they wander about a lot; they waddle and seem to have big feet, like a duck; they frequently look for a lost egg between their legs; they peck and jab at other gulls - but note, the others can do some of these things on occasion too, especially michahellis. (Another difference is its breeding habitat: it differs from the other two, preferring low flat islands in lakes rather than cliffs and steep slopes.)

Traps for the unwary:

As well as misidentifying other species as Caspian Gulls, you can also be put off perfectly good Caspian Gulls because a 1st-winter has patterned greater coverts, or heavily marked scapulars or even a dark underwing. Birds of any age may have a shortish bill, or stout legs or an adult may have a pale eye. With some of these birds you cannot always be entirely certain you have not got one of mixed parentage. It seems likely that Caspian Gulls show as much variability as better-known forms such as Herring Gull, so not all should be expected to conform to the average appearance described above.

Once you have got the hang of 1st-winter and adult Caspian Gulls, you will recognise the look and structure in other ages. You will see very few juvenile birds: they are rare because most have moulted to 1st-winter plumage by the time they reach the UK.

A selection of images appears below. These pictures, and those on the website, demonstrate a wider range of variation than described above, and of course one cannot eliminate the possibility of birds of mixed parentage that may have originated from the mixed colonies in eastern Europe, such as the famous mixed colony at Kleinskochen in eastern Germany. The true range of variation of a pure Caspian Gull is not yet fully understood (at least not by me). 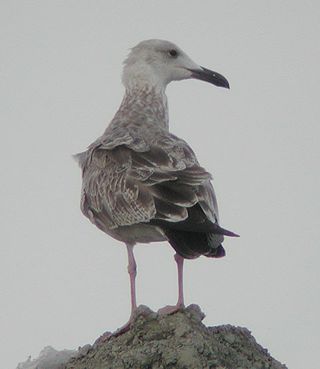 Juvenile, 23rd August 2002: This bird nicely illustrates the characteristic shape, though not all of them have a bill this long. Juveniles are the least common age class seen in the UK. 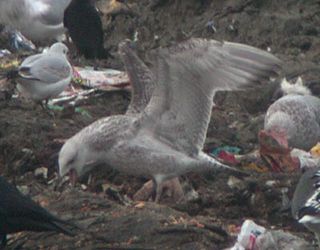 1st-winter, 14th December 2002: Here can be seen the typical albatross stance and the whitish underwing of a 1st-winter. 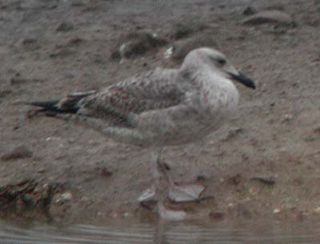 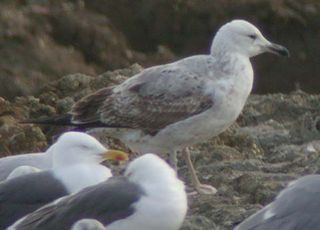 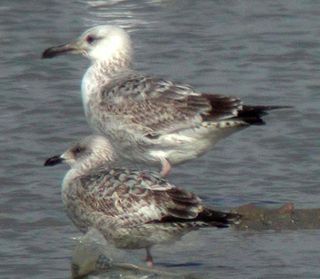 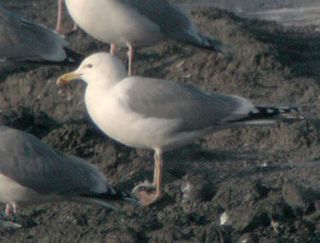 Adult, 11th January 2003: This is a typical adult. Its friendly head, thin bill and long wings recall a huge Common Gull. Other points to note are the limey tone to the bill, the small dark-looking eye and the yellowish-pink legs. 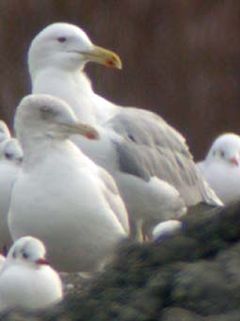 Adult, 29th December 2001: This huge bird, almost certainly a male, demonstrates the aloof elegance of some Caspian Gulls. It is also very white-headed and has an enormously long bill. 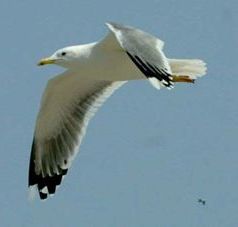 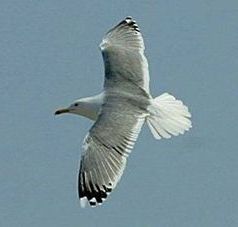 Adult, 2nd March 2002: This bird was taken in Oman, so it is not quite the same thing that turns up in the UK. However, it nicely illustrates the upper and under wing pattern: the white tip and tongue on P10, the grey tongues extending into the black on the upper wing. It differs from typical UK birds in not having a complete black band on P5.

So, in answer to the question: "What is a Caspian Gull?"

Peter Grant would have loved what has gone on with gull taxonomy and identification in the last few years. I can recall standing on the shores of the Caspian Sea with him in 1970 and noticing a distant flock of rather snouty-looking "Herring Gulls". For years afterwards I wondered: had we "thrown away" a flock of winter-plumaged Great Black-headed Gulls? I now know that we had not – they were our first Caspian Gulls! Little did I know that, 30 years later, I could go to my local landfill, near Cambridge, and regularly see the same thing.

Distribution by county of Caspian Gull reports on Bird News Extra, January 2003
(NB: gulls may range widely and some reports may refer to the same birds in different locations). It is clear that there is a southeasterly bias to the records, as would be expected from birds originating from Europe. Away from the Southeast and Midlands, records remain genuinely rare.

Where to look for Caspian Gulls

The following sites (among others) have recently produced Caspian Gull sightings. Several are traditional haunts of this species.

Use the Bird News Extra search page for up-to-date information, and to search for sightings in your area.